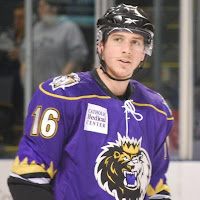 Next weekend the Kings will be hosting HockeyFest at their training facility in El Segundo, CA. Things should get off to a raucous start when General Manager Dean Lombardi opens the second annual event as the featured speaker.

In recent years his ‘State of the Franchise’ sessions have been can’t miss events. While much of the discussion this time around will probably focus on his efforts to acquire a certain big-time unrestricted free agent this summer, past topics have included building his reserve list via the draft. Rarely talked about has been another Lombardi special – acquiring young free agents who have yet to appear in the NHL.

Just in the last few years he’s signed guys like WHL Goaltender of the Year Martin Jones and OHL Defenseman of the Year Jake Muzzin.

Another such signing was Corey Elkins of Ohio State University.  After leading the Buckeyes with 18 goals and 41 points his senior season he moved on to the AHL last year, where he led the Monarchs with 19 points (8g, 11a) through 30 games…leading to his first NHL call-up in December.

He was with the big club for three games, even scoring a goal in one of them.  However, he finished the year in Manchester as a major contributor to a team that went all way to the Eastern Conference Finals.

In the interview below Corey reflects on his rookie season there, talks about getting advice from Dustin Brown and plays word association with some of his teammates – including Jonathan Bernier, Thomas Hickey and Kevin Westgarth.

Corey, the highlight of your year was probably making to the NHL.  As you look back on last season though, what were your three highs with the Monarchs?

* Beating Worcester in the playoffs (they finished first in the division)

Those type of peaks are always balanced with a few valleys over the course of a season, what were the lows this past year?

* Our 5 game losing skid in February

* Losing to Hershey in the Calder Cup Semi-Finals

Dustin Brown has said that the best thing about the NHL lockout in 2004 was that he got to play in Manchester and learn how to be a pro. You’ve been living with him this summer – what has he told you about his time there?

He’s said that playing with the Monarchs did tremendous things for his confidence. He went there, I think as an 18-year old, and he was able to play a ton and score a bunch of goals. A big part of being a pro is you’re on your own now, so you’re taking care of yourself. You have to eat right, get the right amount of sleep, etc. If you’re not taking care of yourself, it’s a long season and you’re fighting an uphill battle. He’s been a good guy to help me along the way and he’s told me quite a bit about his time there.

Bud Holloway was on fire during the Monarchs playoff run this year.   How were the guys reacting to him…is it like a no-hitter in baseball where you guys don’t want to talk about it for fear of messing with his mojo or off the ice and away from the rink were you guys are teasing him, giving him a hard time about it?

We joked about it all the time. That’s the way Bud is too. He jokes around all the time – not in an unfocused way, he’s just keeps things loose. He would score and we would all just start laughing, saying ‘there it is again.’ He kept scoring game winners and overtime goals, we would just get out there and pile on him while we were all laughing. It was crazy.

Several of the names on that list – including Elkins – are expected to be given long looks when the Kings training camp begins later this month.

Before that happens though, we’ll have Corey back on later this week to talk about his call-up to the NHL, living with Dustin Brown, his use of social media, the TV show Entourage, defenseman Jack Johnson, Ohio State traditions and much more.

Prospect File: The Buzz on Muzz – teammates and hockey executives weigh in on Jake Muzzin