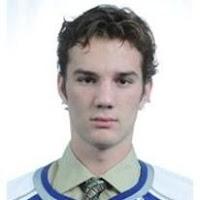 Labor Day is upon us. Along with a three day weekend and the end of summer, it also signifies the return of hockey.  Junior teams throughout Canada – and a few northwest U.S. cities – began opening their training camps over the last few days.

As the Sudbury Wolves took to the ice for the first time yesterday, many eyes were on defenseman Justin Sefton. The fifth overall selection from the 2009 OHL Draft is one of the top prospects for next summer’s NHL Draft.

For the past few years he says he’s kept himself away from “going to parties and hanging out in bad places. It was the rink, home, homework, working out, eating well – all the little things it takes to reach my dream.”

Before joining the Wolves, he had moved away from his Thunder Bay home to attend Notre Dame prep school, located in a small town outside of Regina. The highly regarded institution – with an alumni of players such as Vincent Lecavalier, Brad Richards and Rod Brind’Amour – had been carefully chosen after exhausting research.

Like most young players, he consults with his parents on such major decisions.  However, he doesn’t hide the fact that his agent plays a major role as well.  And why shouldn’t he, he’s represented by Kyle Dubas of Uptown Sports – a firm with a client list featuring some of the best young talent in hockey – including Kings prospects Jonathan Bernier, Kyle Clifford and Andrew Campbell.

Sudbury’s President and General Manager, Blaine Smith, has described Sefton as “mature beyond his years – both physically and mentally,” and one of his former coaches adds “He plays an intimidating game and can back it up.”

This season we’ll have several feature articles on Justin, providing a sort of ‘year in the life’ look into the journey of becoming an NHL draft pick.

Buckle up, we’re taking off…

Last year, your rookie season in the OHL ended on a bit of a downer, as you guys were swept in the playoffs by the Barrie Colts. How disappointing was that and did you learn anything in the process?

As a first year guy, with it being my first year in the playoffs, and we ended up against the number one team in Canada…so, it was tough. We played Barrie six times during the season and only won once – which is a little discouraging. We were clearly the underdogs.  I just tried to keep my composure and take it all in. I learned as the playoffs go on the games only get harder. You can’t take a shift off. If you do, you’re going to get scored on or something bad is going to happen.

From an opponent’s view, what made that Colts that team so good?

They had a lot of depth and very good players. When you look over your shoulder and see Kyle Clifford coming down on you, you’re going to think twice about getting the puck. But, you have to do it and you have to take the hit. They also had (Stefan) Della Rovere, who can hit, skate and shoot. They have Zac Rinaldo – if you have your head down with him, you never know what the hell is going to happen. Then you take guys like (Alex) Pietrangelo – when he takes a shot from the point it’s not going to go wide. It’s going to go towards the net and if you or your goalie don’t grab it, it’s going in the net. Add Burmistrov too. He’s smart with the puck and can find the back of the net just as well.

[note: all of the above players have already been drafted by NHL teams – Stefan Della Rovere and Alex Pietrangelo by the St. Louis Blues, Zac Rinaldo by the Philadelphia Flyers and Alexander Burmistrov by the Atlanta Thrashers]

You came into the OHL on a high, having won a championship with your prep team the year before.  Talk about that experience a little and what it means to be a champion and have that on your resume.

There is a lot of hard work that goes into it, but it’s definitely worth it. It’s something I’ll never forget. Not a lot of players get to say they won a National Championship. I’ve never seen another group of guys as close as that team. We were like a family. Everybody was on the same page. We all did the same thing, even if we didn’t want to. We knew that it was for the team and would make us better.

Do you remember how old you were when you first started having thoughts about wanting to play hockey?

I can’t exactly remember the age, but my parents knew to put me in hockey right away.  As soon as my dad would turn on the TV to watch a hockey game I’d be the first person one in the room.  I was always fiddling around with sticks when I was younger too.  There was a point where I had to choose between playing soccer and hockey and I didnt even have to think about it.  Hockey was the only choice for me.

Last year you had the pressure of it being your first year in the OHL. How will the pressure be different this year, knowing it should culminate with you being drafted by an NHL team?

I need to put that in the back of my head as much as possible. I also need to turn that pressure into a drive that fills my gas tank. I just need to push forward and not think about it.

What worries you the most heading into next summer’s draft?

Letting myself down. Not performing the way I know I can.

Assuming your parents are with you at the draft, who will be the first person you call after your name is called?

Probably my older brother if he wasn’t there with me too.  He’s somebody I look up to quite a bit.

You’re a Blackhawks fan, but let’s take the team out of the equation for this next question.  Each city has its’ own unique characteristics.  Saying nothing about the particular team, just the city.  Which NHL city do you think would be the most challenging for you to adjust to living in?

Probably a place like Carolina or Florida.  The heat is different that Northern Ontario, where we can still get snow in April.  Being a northern kid I’m not a real big fan of heat waves.  I like it cool.

If somebody wrote a book about you, what would the title be?

Sefton’s Dream.  Everything I do right now is focused on one thing and that’s making it to the NHL.

We’ll check back in with Justin in a few months to see how his season is progressing.

Interview w/ Kyle Dubas – one of the brightest, young agents in the business