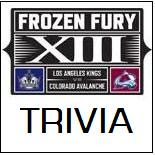 For over a decade now Kings fans have been making the pilgrimage to Las Vegas for the spectacle that is Frozen Fury weekend.

Any Kings fan that has made the trip surely returned home with numerous stories. And yes, we all know What happens in Vegas, stays in Vegas.

However, for those that are Frozen Fury regulars, how much do you actually remember from the games?

Let’s put your knowledge to the test with a (not so simple) 10 question quiz. How many can you get right?

1. In the history of the Frozen Fury series, the Kings have played three different teams. Name them.

2. The 2004 game was cancelled due to the NHL lockout. Who were the Kings scheduled to play that year?

3. Which Kings player holds the record for the most career points at Frozen Fury?

4. How many goals has Dustin Brown scored in the Frozen Fury series?

5. Who scored the first Kings goal in Frozen Fury history?

6. How many wins do the Kings have at Frozen Fury?

7. During which year did Frozen Fury weekend actually feature two games, instead of the traditional single game?

8. Last year, Ryan was the second Kings player with the last name ‘Smyth’ to register a point at Frozen Fury. Name the other one.

9. Which one of these players did NOT score a Frozen Fury goal for the Kings – Aki Berg, Glen Murray or Jeremy Roenick?

10. Who is the only Kings goalie to record a point at Frozen Fury?

Answers are available by clicking here.