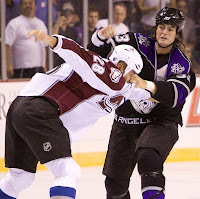 It’s not uncommon for a Kings prospect to end up as a major part of the game summary at Frozen Fury.

Other youngsters you may not remember at this point, who have also performed well in the series for the Kings, include – Pavel Rosa, Scott Barney and Jaroslav Bednar.

Which of those two groups Kevin Westgarth will ultimately end up in is still yet to be determined. For now though, he remains very much top-of-mind for many Kings fans when they think about the annual battle on desert ice.

Last September he single handedly put on a performance with his fists that will not soon be forgotten.

As such, we figured he’d be the perfect person to kick off our Frozen Fury Player Preview series.

Hope you enjoy this exclusive interview with Kevin Westgarth…

MM: You’ve played in two Frozen Fury games now. What’s your mindset as you head out to Las Vegas later this week?

KW: Although the environment and atmosphere is a little different, I love playing in MGM. It’s like everybody is right on top of you, it’s so loud.  Everybody is pumped to be in Vegas too.  They’re probably a little socially lubricated at that point.  So, it’s a great time.  However, you have to prepare like any other hockey game.  Guys are still trying to take your head off and coming for you.  It’s fun, but you need to make sure your head is in it and you’re ready to roll.

Last year you seemed especially pumped up, even skating by the Avs bench after one of your fights and cupping your ear (as if to say ‘I can’t hear you now’).  Was that a move that was already in your bag of tricks prior to the game or was it just spur of the moment that night?

It tends to be spur of the moment.  You never want to embarrass a guy with anything crazy like that.  But, sometimes, definitely – if a guy on the other team has taken some liberties, he needs to be kinda taught a lesson.  And if he’s going to be a jack-ass about it, then it kinda leaves it a little more open to do the same yourself.

Again, you never want to embarrass anybody.  I have enormous respect for probably about 95% of the guys who I’ll end up fighting.  To me, they’re the players that I look to to learn from.  It’s just funny that the guys who have been in the league for awhile, that I’m trying to learn from, are the guys that I’m going to end up having to fight.  I love entertaining a little bit too, but it’s definitely more about the job and keeping my guys safe.

You tussled with Scott Parker that night.  Did you already have him on your mind prior to the game or did things develop as a result of him gunning for you out on the ice?

Obviously, even just looking at Scott Parker, you’re never going to get him out of your mind.  He’s a scary, intimidating fella.  But, I knew he was in the game.  I kinda took a run at one of the D and Chris Stewart stepped up and grabbed me and fought.  It was a decent fight.  After seeing that, Parksie asked me to go off the draw.  Another great fight.  It was kinda cool to fight one of those guys that, like I said, I looked up to.

You were such a huge part of that game, I’ll assume you were on a high that night.  How big of a disappointment was it to be sent down to Manchester just a few days later…and were you expecting it or was it somewhat of a surprise to you?

I try to keep my mind as far away from that as possible.  I can only control what I can control.  Obviously, it’s a huge disappointment.  You never expect to be sent down.  It’s just a huge disappointment anytime it happens.  But, I think this past year was great for me.  I got to expand some of the other parts of my game and took on a few new roles.  I think in the long run it will help me out and it will help my teammates out, that maybe I’ll be able to chip in a little more maybe with them.  But, obviously, my first focus is the physical side.

Obviously, you get a ton of comparisons to George Parros – the Ivy League background, playing for the Monarchs, the long hair, etc.  How about growing out a good ‘stache for the game in Vegas?

If I could, I would.  I’m still a little under-belt, I guess, in the facial hair department.  I might be working on a beard or something this year.  I don’t know, we’ll see what happens.

Exactly!  I’ve always wanted to do that when we were playing Anaheim.  Just to skate by him and see what he thought.

In all seriousness, as you head into this year’s Frozen Fury, do you have what’s happened in the past fresh on your mind or do you put it all behind you and just let things develop organically?

I think definitely the latter there.  Training camp is such a high pressure situation for everybody.  You’re never sure what’s going to happen.  So, you try to keep your eyes day to day and the hockey game ahead of you.

Inevitably, it’s kinda fun to think back about what happened last year.  Vegas is a great time.  I went out and had a nice dinner with some of the boys and I went to bed early.  Maybe that was my problem.  (the smirk said it all, really sold the point).  I need to figure out the winning formula to make sure I’m playing my best the next day.

We wrapped things up at that point, as things started to turn away from hockey and closer to that entertainment thing he mentioned earlier.