You are here: Home / hockey / Camping Guide 2010 – thoughts from Greene 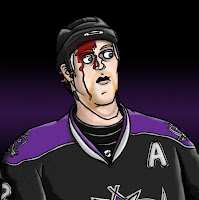 Day by day, Matt Greene looks to be getting a little better.

However, for fellow defenseman Alec Martinez and Andrew Campbell, it probably means it will be that much tougher to crack the NHL line-up this season. Both were sent to Manchester earlier this week, leaving Thomas Hickey and Jake Muzzin to battle it out for the (temporarily) open spot on the blueline.

After the morning skate today, Greene made his inaugural journey into MayorsManor…

MM: This camp has been filled with so many of the Kings high-end prospects. Because you haven’t been out there skating in all the drills, have you seen anything different from that group – maybe a player that looks like he’s improved quite a bit from the last time you saw him?

MG: Hickey is a year older, so he’s more mature. I know he had an injury last year, but he’s always poised with the puck. Muzzin, this is my first time seeing him – but, he looks like a good defenseman, a two-way guy who can move the puck. A lot of guys look good actually – even the guys that were sent down, like Martinez and Campbell. I didn’t really get a good chance to see Fransson, but I heard good things.  They’re going to be pretty stocked back there in Manch.

What are some of the questions the younger players ask you when they’re looking for advice?

I don’t even know if guys know who I am.  I’m just another equipment guy walking around who gets on the ice after everybody else leaves (ever the jokester!).  So, I haven’t had a lot of contact with the guys.  But, it’s more day to day stuff.  They know how to handle themselves on the ice.  That’s why they’re here, due to their skill.  They might ask me about the lifestyle – what’s it like living out of a hotel for a couple of months, where to get a bite to eat, where to get groceries, that’s more what I can help them with right now.

Willie Mitchell came to town looking for a good place to have a burger.  Have you made any recommendations for him yet?

Yeah.  I’ve turned his eye to a couple of places in Hermosa.  (no word yet on if they’re “Mitchell approved” – stay tuned)

Scuderi played four years at Boston College and made three trips to the NCAA Finals (winning it all in 2001).  Harrold, who also went to BC, was captain of his team that lost in the 2006 NCAA Finals (ironically, to Davis Drewiske and the Wisconsin Badgers).

Greene, took his team – the University of North Dakota – to the NCAA championship as well, losing to Denver at the end of his final college season (2004-05).

And who just started his freshman classes at North Dakota?

HINT:  he’s one of the newest Kings blueline prospects…