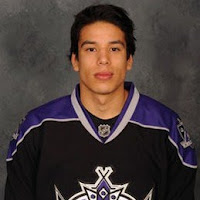 Some players have a very linear path to the NHL. They play for one junior team, get drafted, make a brief stop with that team’s AHL affiliate and then eventually make their NHL debut.

Jordan Nolan isn’t one of those players.

His story reads more like the tough luck, work extremely hard for everything he’s earned path.

At the 2005 OHL Draft, John Tavares was taken first overall by the Oshawa Generals. He just completed his first year with the New York Islanders. Three future members of the Kings organization were also taken in that first round – Drew Doughty (Guelph), Jake Muzzin (Sault Ste. Marie) and Michael Pelech (Kitchener Rangers).

Since then, it’s one big wild ride for the big forward.  He played just one season with the Otters before ending up on the Windsor Spitfires for the next two seasons.  At that point, he requested a trade and was sent to the Soo Greyhounds.

Near the end of his first season in the Soo he was suspended 20 games.  Many felt that would be the end of his junior hockey career, as it would extended into the following season – forcing him to miss nearly one third of his over-age year in the OHL.

That didn’t stop the Kings from drafting him in the seventh round just a few months after the suspension was announced (2009 NHL Draft).  They liked what they saw in the 6′ 3″ center-left wing.  He brought good physical presence to the organization.  Something sorely laking at that point in time.

When training camps opened at the end of last summer, he got a sniff with the Monarchs during preseason, but was ultimately returned to juniors.  All of the sudden, he became a point-a-game player.  Entering this past season he had scored just 97 points in 186 games.  Then, in a season that started late due to the suspension, he posted 48 points (34g, 44a) in 49 games.

Last season ended with a stop in Ontario of the ECHL for their final three games of the year in Las Vegas.  When the Reign couldn’t muster enough points to make the playoffs, he was soon off to Manchester, signing an amateur tryout agreement.  However, he never saw any official AHL action.

So, after a few steps forward, he was back in the Soo just a few weeks ago.  Although he’s too old to play another season in the OHL, he was skating with the team as part of their training camp, before coming to LA last week for the start of the Kings Rookie Camp.

MM: Any personal goals this year in training camp?

JN:  Short term goals right now. My main goal is to get a contract in this camp. So, I’m going to go out there and work hard, hopefully get signed.

You were teammates with Jake Muzzin the last few seasons in the OHL.  How would you describe his game?

He’s a very good player. He’s very smart, he’s physical. He can skate. He has it all. He has a very good chance of making the Kings this year. He’s always working hard, even off the ice, in the gym and stuff like that. He’s a great player. 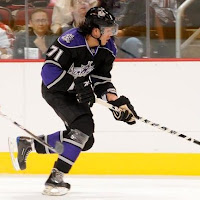 In a recent interview we did with Dave Torrie (his OHL General Manager with the Soo Greyhounds), he called you one of the toughest players in the OHL last season…

Yeah.  I think I was definitly near the top in the O’.  Not only fighting, but as a player too – I played a physical game, a toughness game.  Guys always knew I was on the ice.  Hopefully I can transfer that over to the American League or the National League someday (no people, not baseball, he meant AHL or NHL).

That’s awfully high praise, especially considering a guy like Kyle Clifford plays in the O’ too.  He’s a guy you’ve gotten to know at some of these camps over the last few years.  Do you guys ever joke about who might be the tougher of you two?

Not really.  I think we both know we’re pretty tough customers.  We’re good friends off the ice, so we do talk about our days in the OHL, our past fights and stuff like that.  But, we don’t really talk about going with each other.

You had a chance to go to Ontario last year and get some games in with the Reign.  Any impressions from the ECHL?

It’s a lot different than the OHL, of course.  They’re grown men out there.  You’re not playing against 16-year old kids anymore.  Everyone is pretty strong, pretty in shape and you take your time when you’re on the ice.  So, it’s good experience for me.

Guys often talk about the speed of the game at different levels.  Talk about the ECHL vs. OHL.  How would you compare and contrast things?

I think it’s a little quicker.  I didnt have a tough time transferring over.  I’m 20 years old, so it’s not like I’m a 16-year old playing with 30-year old men.  There’s definitly a difference in speed, but it wasn’t that hard to carry over.

So far, so good.  In the unofficial scoring from the just completed two-game Rookie Series with the Coyotes, Nolan had an assist in each game (helping Robbie Czarnik in game one and Jordan Weal in the second tilt).

Will he make the Kings this season?  Probably not.  Schenn, Clifford and Elkins are, more than likely, ahead of him on the depth chart.

However, he’d be a solid signing for Manchester.

Guys around the AHL would certainly know when he’s on the ice.