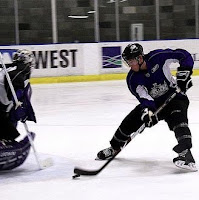 Too small. Too short. Not big enough.

Listed at 5′ 8″, Brandon Kozun has heard it all before. Yet, it hasn’t stopped the 20-year old right winger from putting together an impressive hockey resume.

He’s coming off back to back 100+ point seasons for the Calgary Hitmen of the WHL. Last year he led all of junior hockey with 107 points (32g, 75a). And he was a top player for Canada at the World Junior Championships over the winter.

That certainly doesn’t sound like a guy that should have fallen all the way to the sixth round before being drafted in 2009.

I’m sure scouts did their normal level of prodding and investigation before the draft. However, one thing that may have gone overlooked is…um…his astrological sign. Serioulsy.

For those unfamiliar, let’s review a few of their characteristics…

Pisces are said to long for movement and/or be extremely restless. If you’ve ever seen this kid on the ice, you’d understand. His feet never stop moving. Ever!

People born under this sign are always trying to adapt themselves to the situation they’re in.  Perhaps that’s what makes him so coachable.

Additionally, the symbol of a pisces depicts duality, a struggle between one’s spiritual soul and it’s physical body.  Simply put, his small frame is struggling with his inner player.  His heart and drive – and fearlessness – don’t match up with his smallish frame.

Finally, what about their natural ability to imitate or mirror another person?  While many people in Southern California will be quick to compare him to Mike Cammalleri or Paul Kariya, I’d say he’s shooting more for Theo Fleury.

Enough of the Miss Cleo type hockey analysis though.  See what Brandon has to say…

MM:  Take us back in time a week or so. When you came down to LA for the start of rookie camp, where was your head? Do you come in super confident, saying ‘I’m going to make the Kings roster this year.’ Or did you come in with tempered expectations, thinking about probably going to Manchester, just trying to learn and soak in as much as you can?

BK:  I think if you come to camp wanting to go to Manchester, you shouldn’t be here at all. I’m here to make the LA Kings and that’s what I’m going to do.

As rookie camp winds down and you start to prepare for the main camp, how has the last week been going for you?

I think it’s been going pretty well.  The games probably could have gone a little bit better.  The first game I played…not bad.  I was kinda happy with myself.  But, I know I can still play better.  I’m trying to get my feet underneath me.  I havent played very many games in about four months.  So, I’m just trying to get everything going.  I have to show more of myself to the coaches and the scouts.  Hopefully I can do that in that main camp.

Break down those two games this week for us.  The first few days of camp were drills and instructions, followed by some scrimmaging on Tuesday, before you headed over to Phoenix.  What was the general atmosphere heading into game one?

The shootout went well, you picked up the game winner.  How about the atmosphere after the game – were things a little better then?

The next day didn’t go so well…

Obviously, in the second game we didn’t have a very good showing.  It’s not a great thing when your team loses 7-1.  Not very many people played well and it’s upsetting that it happened.

When you have a guy like Martin Jones in net – somebody you know very well from juniors – does that give you an extra level of confidence versus when Berube or the other goalies are in net, simply because you don’t know them?

I think all the goalies played well.  They all stood on their heads at times.  Berube and Zemlak didn’t exactly stand a chance in the last game.  We didn’t help them out very much.  Obviously, being around Jonesy all year and seeing what he can do, I know what he’s capable of.  He’s a force when he’s in the net.  He’s hard to score on.  So, when you get one by him, you’re pretty happy about it.

Wrapping up the whole week, in practice and in the games, you’ve had a chance to see what all the other prospects bring to the table.  Couple that with your desire to make the team, how would you rate your chances at this point?

I’m not the coach.  I don’t make those decisions.  Personally I think I’m good enough to make the jump.  But, it’s not up to me at the end of the day.

One thing he he can control is the level of effort he puts forth on an off the ice.

After watching him up close this week, I’ll say this…true to his sign, he never stops.  If you’re tired of hearing guys use cliches like “I need to keep my feet moving when I’m out there,” just watch Kozun.

In camp this week, two of Dean Lombardi’s other WHL draft picks – Brayden Schenn and Thomas Hickey – will get most of the attention.  But, don’t count out Kozun.

He has the confidence and the drive to someday be in the NHL.  The stats say he has the skill too.  For those that want to insinuate he doesn’t have the size, he’s probably going to prove you wrong at some point.