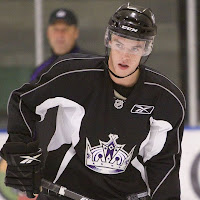 Ned Colletti has since rebuilt the Dodgers into a team with a strong core and plenty of prospects. Ironically, they’ve been known for decades as a pitching-first franchise – today, it’s one of the weakest positions in the organization.

Nearly on a parallel track, Dean Lombardi has re-built the Kings from the ground up. And while they’ve primarily been known for their offensive players – with names like Dionne, Gretzky and Robitaille – today, it’s largely goaltending and defense that provide a foundation for the future.

One of those key components on the blue line is Thomas Hickey.

He was Dean Lombardi’s first “real” draft pick, as the 2006 event he presided over was merely a few months after being hired.  The selection, fourth overall in 2007, has been a controversial selection almost from the moment his name was read at the podium.

Hickey wasn’t on the radar of most teams picking in the top half of the first round that year and he’s probably been an after thought to most teams since.

However, Lombardi and his right hand man, Ron Hextall, will say different.  They’ll remind you that Doughty and Simmonds are the exceptions, not the rule.  Guys aren’t supposed to make it to the NHL that young.  They’ll also tell you that despite Hickey’s injury woes the last few years, he remains one of the prized ‘assets’ in the organization.

So, is this the year?  Is it time for all the past conjecture and complaining to be put to bed once and for all?  Can Hickey make the Kings roster this season and wash away any concerns raised since the summer of 2007?

He thinks so, adding that he’s all healed up and ready to make an impact at the NHL level.

I caught him with him at camp on Monday to touch base on a few topics.  We talked Colten Teubert, Willie Mitchell, Ron Hextall, HockeyFest…and of course, a little bit about Manchester vs. LA this year.

MM:  How is camp going so far?

TH:  They’re going well.  I was fortunate to get into those rookie games and sorta get up to speed right away.  Whereas, all the other guys are coming in and this is sort of the first competitive hockey they’ve played all summer.  So, the first three days have gone according to plan.  A lot of the stuff is similar to what we covered in the Rookie Camp.  So, I’m feeling good where I’m at right now.

You’re been to LA for various camps several times over the last few years.  Is it getting any easier?

It’s definitely easier, especially compared to the other years.  Down in Manchester we play the same systems as up here.  So, I even had a head start – playing in those systems all year.  Then, it’s sort of just a refresher course when you get into the video room and out on the ice.

When Rookie Camp opened the team was hosting HockeyFest here at the practice facility.  What was it like to share the building with 2,000 fans that day?

It was awesome.  We heard there was going to be HockeyFest, but I wasn’t too familiar with what it was.  You could hardly get to the rink there were so many people.  You couldn’t park a car in the parking lot because it was full of attractions and things to do.  I think it was great for the team and the organization.  It’s always nice when you have fans that will come out to El Segundo to watch you practice too.  So, it’s encouraging for everyone I think.

While you were on the ice that Saturday morning Ron Hextall had some very positive things to say about you during the State of the Franchise session.  Did you happen to catch wind of what he said?

No, I didn’t hear anything.  I’ve had lots of talks with Hexy though and he’s been very supportive.  He tells me what he likes about my game and when he likes it.  So, it was probably along the same lines.

Has there been any specific bit of advice he’s given you along the way that’s been extremely helpful?

He says just be patient and keep on going.  The biggest thing he says is ‘You’re on the right track. There have been minor setbacks, but we’re proud of where you’re at in your career right now.  Just keep working, things will play out.’  He also tells me ‘Try not to think too much into things and look into all the little games that can get your mind spinning.  Just go out and play hockey.’

You had a busy year in Manchester last season, did you find any time to keep an eye on the T-Birds (his old WHL club back in Seattle)?

I do.  That’s something that means a lot to me.  I spent four years there.  So, between my teammates and the Billet family, there’s a lot of special people there.  I’m always checking up.  It was sort of weird, they went through a transition to a younger team.  I went from knowing everybody to maybe knowing half a dozen guys.  I still keep in touch with them, the coaching staff and the GM there.  I wish the best for them.  Hopefully they can turn it around there this year.

How about your play with Team Canada.  You spent some time partnered with another Kings prospect, Colten Teubert, and you guys appeared to have good chemistry.  How would you asses things?

I’d agree.  Tubey is…we sort of match up well.  I like to get up in the play a bit and consider myself a reliable guy.  He’s more of a stay at home guy, really physical.  He’ll handle that part of the game when it needs to be handled.  I think we read off of each other well.  He’s fun to play with.  He’s a loud talkative guy too.  So, I enjoy playing with him.

Many people have you somewhat penciled in to make the Kings roster this season.  If that didn’t happen and you ended up back in Manchester, could that be a silver lining in otherwise dark cloud, to possibly be reunited with him?

Absolutely.  You take it day by day and whatever happens, you look at your scenario and try to make the best of it.  But, if I had the opportunity to play with Colten again, that would be great.

When Willie Mitchell signed here how did you take it – was it another roadblock to you making the NHL or did you look at it as there now being another veteran to learn from…or maybe even a mix of both?

You look at it and right away you say ‘Too bad.’ At the same time, you want to be part of the Kings and you want to win.  When you bring in a guy like Willie Mitchell it’s only going to make your team better.  So, I just want to get into that sixth defenseman spot and contribute.  Hopefully he can help me out.  We can go from there.  Then, it’s a positive thing for everyone.

If Hickey can make the Kings this year, that would be a positive thing.

For starters, Lombardi and Hextall could finally move beyond any criticism that may have come their way by selecting him so high on draft day.

A solid season would also be a nice reward for both the hard work Hickey has put in to rebound from various injuries and the unwavering faith and support Kings management has shown in him.

When Lombardi first arrived in town the cupboard was bare.  He needed quantity as much as quality when looking for young players.

With Hickey’s development, Lombardi has been more about ‘patience’ than pushing.  Now it’s time for the young defenseman to show that he’s been worth the wait.

Proving that he was in fact a home run prospect after all would be great.  Yet, a run scoring double would probably be just fine too.