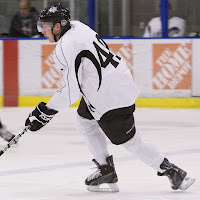 Defenseman Nic Deslauriers is a kid I’ve been greatly impressed with from the moment I first saw him on the ice live (see last year’s training camp articles). The Kings originally selected him in the third round of the 2009 draft and he appears to have a solid NHL future in front of him.

He was traded earlier this summer from his junior team of the last three years, the Rouyn-Noranda Huskies, to the Gatineau Olympiques in the Quebec Junior League (QMJHL).

Even with the Kings injury situation, he likely didn’t even have an outside shot at making the Kings roster this season due his lack of experience.  Something he’ll get more of this season, as earlier today he was reassigned back to his junior club.

Prior to being shipped off, Nic makes his MayorsManor debut…

MM: Let’s back up a week or so. How did Rookie Camp go for you, prior to starting the main camp last weekend?

I think I had two good games against Phoenix (the two-game Rookie Series). Camp got a little easier as things moved along. I just tried to keep things simple.

Speaking of those games in Phoenix, what was up with you dropping the gloves? You’re not known much for your fighting skills.

I had to be rough. Last year I wasn’t rough enough in the two-game series. So, I knew had to be a little rougher. He ran into Jonesy, so I had to do something.

When you say you needed to be rough, was that your personal opinion or was it something the coaches had talked with you about?

I think I felt it.  You have to be meaner in each game.  I just tried to apply those things and I think I did good.

Talk about some of the pros you’re in camp with.  Who are some of the guys you look to for advice?

Willie Mitchell and Drew Doughty have helped me a lot, doing the drills and stuff.  They’ve given me some key points.  I think it makes camp easier.  The first few days of camp with the pros were a bit stressful.  They were there to calm me down and that helped me a lot.

Training camp cuts are coming soon, what are your expectations?

Each camp I try to make my place.  I hope to make the team.  If I have to go back to juniors, for sure it’s going to be sad a bit.  But, I’ll just keep on working hard, having a good season.  You never know, something might happen, then you get called up.  If not, be ready for next year.

Talk about the playoff experience last year in the Q.  What did you learn from it?

We made a lot of trades, hoping to go all the way.  Then we had the stuff with Patrice Cormier (NJ Devils draft pick and captain of Canada’s World Junior team, who was later suspended by the QMJHL for the playoffs).  That hurt us a lot.  I think we had a real good team though.  Moncton was probably better.  Once we got there, we lost in five.  Being eliminated like that made me work harder this summer.  It made me hungry.

Playing junior hockey it’s not uncommon to face a fellow Kings prospect.  What’s it like for you when you have to play JF Berube?

You know the guy, but you want to have a little competition with him.  On the ice you don’t have any friends.  After the game, I’ll probably go see him though.  On the ice, he’s like somebody I don’t know.

How closely did you follow the Kings last year, now that you’re part of the organization?

I was watching everything in the playoffs.  It was the first time I really paid that close of attention.  I would talk with Nelly and the coaches to ask how things were going in the season because sometimes we don’t get good coverage of the Kings in Canada.

How about the number you’ve been wearing in camp the last few times.  It was probably just assigned to you, so what would you hope to wear in the NHL and why?

I don’t really care.  They can give me any number they want.  The logo in front is better.  In juniors (with the Huskies) I just picked a number from the two or three choices they gave me.  If I had a choice here, I guess I would pick four or ten.  When I got traded to Gatineau they offered me four.

Final question, let’s test your knowledge of Kings history – can you name three players that wore the Kings’ purple and gold jerseys?

Hopefully by the next time he hooks up with the Kings he can answer that last question.