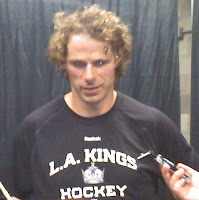 The Zeus is loose. Just look at the hair.

When Dean Lombardi signed Michal Handzus to a four-year free agent contract in the summer of 2007, he hoped Zeus would return to the player he was out east (where he posted back-to back 20 goal seasons for the Flyers) – not the player he was the prior year in Chicago. A knee injury saw his numbers go south with the Blackhawks, only eight games played the entire year.

Year one in LA was almost like an extended rehab assignment. He didn’t score his first real goal that season until December 6th (his goal on opening night in London, vs. the Ducks, was actually an empty netter).

That appeared to be the start of his stats heading north again though.  He posted four goals in seven games, three of them short-handed!  Yet, after December 17th, he wouldn’t find the back of the net again until March 22nd.  Just a tough year no matter you slice it.

He turned the page in the summer of ’08 and has really never looked back.  In fact, for the last two years he’s arguably been the Kings MVP.  A durable, third line center – with a knack for scoring timely goals.

First the knee returned.  Next was his goal scoring.  Now, he’s looking to complete the hat-trick…the hair is back.

While not as famous as say Jaromir Jagr’s mullet, Zeus used to have a fresh Euro-hockey look.  One that was uniquely his.  Call it part-Michael Bolton, part-Kenny Powers.

How about the important questions though, like what does he think of Frolov being Eastbound and is he down with Poni being his new linemate?

It’s all here, in an exclusive interview with Michal Handzus.

MM:  As things started to shake out over the summer with the Kovalchuk situation, for a brief moment it looked like Frolov may come back to the Kings.  Was that something you were excited about or mentally had you already moved on?

MH:  I talked to Fro after the season and he was saying he had some offers from Russia too.  Obviously, the money was way better than here.  I thought he might go to Russia because nobody in the NHL would give him that much money.  But, he chose the NHL, so I thought we had a chance.  I don’t know what happened, but there’s no looking back.  We got Poni instead of him and I think he’s looked really good on the ice so far.

You played against Poni when you were with the Flyers, including in the 2004 playoffs.  It’s been a few years, is he the player you remembered or has he changed?

He’s a big, strong guy with a great shot.  He’s exactly what I remembered.  He’s very fast actually.  He’s strong on the puck and he communicates well.  It’s everything we needed, so I think he’s a great addition for us.

On your other side is Wayne Simmonds.  How have you seen him develop over the last few years?

He’s getting better every year.  This is going to be a big year for him.  You could see right from the first day of training camp how comfortable he looks on the ice, with the puck, without the puck and everything else.  I think he looks stronger too than he has the last few years.  He’s worked hard on his game and it’s going to benefit him this year.

You came into camp with the longer hair this year (he gets an instant ear to ear smile, before I even finished the question) – is that something you’re going to let grow out this season?

Another guy gone from the team this year is Raitis Ivanans.  It looks like he’s being replaced with Kevin Westgarth.  Do you think his energy level will add another component to the team?

I thought Ivan did a good job for us.  When we needed somebody to step up and make a physical statement, he did.  Obviously, management knew that Westie is getting ready for his big step.  So, that’s how it goes.   Westie looks ready to grab that spot.  We’re going to need that kinda guy for us, to help take care of us.

In game three of the playoffs last season, Handzus scored two goals in the victory over Vancouver.  That set the Kings up nicely to take a commanding three-games-to-one lead in game four.

While things didn’t work out as planned, Zeus is back and ready for more.

Don’t expect Handzus to lay an egg in his contract year, like his former linemate did last season.

True to form, Zeus will probably get stronger as the year wears on.

Which is perfect for a team that plans on going deep in the playoffs this season.