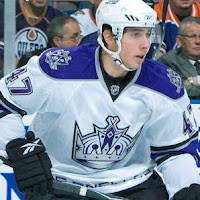 After a long summer, we’re just a few days away from something huge.

Since Dean Lombardi’s arrival in Los Angeles in April 2006 he has been on a mission to stock the organization with high-end prospects.

This Saturday, 3,000 fans are expected to descend upon the Kings training facility in El Segundo, CA for the second annual HockeyFest – where fans can interact with alumni, get autographs and attend various speaker sessions.

Simultaneously, the fruits of Lombardi’s labor will be on display, as the Kings Rookie Camp gets underway in the same building. Nearly every major prospect he’s acquired in the last four years will be present – forwards Clifford, Kozun, Loktionov, Schenn, Toffoli and Weal; defenseman Deslauriers, Fransson, Hickey, Muzzin and Teubert; plus goalies Berube and Jones.

Corey Elkins will be there too.  The 6’3″ center just completed his rookie season with Manchester, where he posted 21 goals (tops on the team) and 43 points (second on the team).  Both totals also placed him in the top-10 for rookie scoring in the AHL.

He was expected to battle Brayden Schenn for a possible roster spot with the big club this season.  Now, with news coming out today about Schenn having a knee injury that could keep him sidelined for several months, you may start to hear more about Elkins.
Get ready for camp!  Here’s the first in a series of exclusive interviews you’ll find on MayorsManor in the days to come…

MM:  You signed with the Kings organization as a free agent coming out of college in the spring of 2009.  What made you want to sign in Los Angeles, especially considering the team hadn’t made the playoffs in eight years at that point?

CE:  Well, when I was going the process it was crazy. It was almost like getting recruited for college all over again.  The opportunity just felt right with the Kings though. I liked Hex (Ron Hextall) and Jack (Johnson) and some of the guys that were coming out. I had some meetings with them and it all felt right. With me being a little older, it looked like I could have a quick learning curve in LA and get some good experience – whether it be in Manchester or with the Kings. It was also exciting to be part of such a young and up and coming team. You see the talent. If you go though the guys that are in the organization, you know it’s just a matter of time.  So, I was excited to be part of that.

You’re pretty familiar with the Kings future, having been to a few of the camps already.  How about the past?  Let’s see how well you know your Kings history – can you name five players that wore the old purple and gold jerseys?

Ah. I can think of at least two. Rogie Vachon and Marcel Dionne. Hold on though…let me think about the pictures in the locker room. (a few second pause) Daryl Evans and Dave Taylor. That’s only four, but that’s it.

Now, prior to your college days you actually played in the USHL with Jeff Zatkoff, one of the goalies in Manchester this past season.  Any memories from that time – two seasons, two different teams…

It was a little crazy actually. My first year was with Compuware in the North American League. They folded. I was picked up by the St. Louis team (USHL) and then they folded. That’s how I ended up in Sioux City with Zatkoff.  Luckily, we had a good team and had a good year. The USHL was a great time. It was awesome hockey. To be in those cities – smaller towns – where people love hockey, it was a lot of fun and a good experience to have at that age.

Playing for Compuware is such an honor for kids from Michigan.  Guys like Mike Modano and Eric Lindros played there. For people that might not be familiar with the program, talk about that experience…

Add the Hatcher brothers to the guys you already mentioned, lots of good players go through there.  The whole organization is first class.  I got to play at home my first year, so my family was able to see me all the time.  That was one of the most fun years I’ve had playing hockey actually.  I haven’t seen any North American League hockey in awhile, but it was really good hockey at the time.  It was fun.

So, after the USHL you moved onto college and things didn’t exactly get off to a good start.  In fact, you got hurt…forcing you to miss an epic college hockey game that February, Ohio State and Wisconsin outdoors at the legendary Lambeau Field. How disappointing was it to miss that game with an injury?

That was a huge bummer.  I didn’t even get to travel actually because my surgery was just a few days after that.  I knew a few guys in Green Bay too, who were going to come out and watch the game.  So, it was a real bummer to not play in front of them as well.

After you healed, you put up fairly small numbers your sophomore and junior year. Then, you went off during your senior year – leading the team with 18 goals and 41 points. Were you eating your Wheaties that year or what?

It’s hard to put a finger on exactly what happened.  But, I know that from a player’s perspective, it felt like I wasn’t under the microscope any more.  I had more freedom to play my game and I had a lot more ice time.  I was putting points up right off the bat, so that helped too.  I knew I wanted to play hockey, so it was now or never.

Let’s move on to some off ice stuff.  You’ve been spending some time here in LA, living with Dustin Brown and his family.  The Kings signed Willie Mitchell a few weeks ago.  He’s a big burger guy, so what are you going to recommend to him?

I went to Huntington Beach a few weeks ago, Twenty-Five Degrees was pretty good.  I like The Counter too, over in El Segundo.

I hear you’re a pretty big Entourage fan.  So, of the four friends – Vince, Turtle, Drama and E – which one do you most identify with and why?

Well, Turtle is my favorite.  I don’t know if I identify with him though.  I like his laid back attitude.  Plus, I think he’s pretty funny.  I’m loving it right now because he has his new business going, has a super hot girl now…he’s coming into his own.  I’m liking it.

You described your senior year at OSU as ‘now or never’..and you’ve signed another one year deal with the Kings this summer.  So, what are your goals right now – is this another ‘now or never’ season for you?

I haven’t even looked past training camp.  To me, it’s still about taking things one day at a time, a week at a time.  Obviously, my first goal is to make the Kings right out of training camp.  So, I’ll be doing the best I can in camp to show them that I can help the team, help the team win.  That’s pretty much as far as I’m looking right now.

If you ended up back in Manchester would you be disappointed on some level?

No, because opportunities come around all the time.  It’s a good league to develop in.  I’m sure I’d get more ice time opportunities and continue developing my game.  I’m only one year into my pro career, so there’s still a lot to learn.

Class will resume Saturday for all the Kings prospects, as they take the ice for the start of Rookie Camp.

Elkins and the others will continue down the path of learning, applying and improving.

The big question is, who will develop as the star student(s) and make their way to the front of the class?