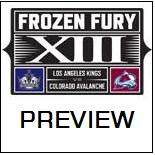 The Kings travel to Las Vegas this weekend for their annual Frozen Fury extravaganza.

This isn’t just any ol’ preseason game though.  In fact, it’s probably unlike any other exhibition played by two NHL teams.

As such, we’re kicking off five days of Frozen Fury coverage.  Yes, five!  Several Kings players will be stopping by to help us preview the game – including Ryan Smyth, Wayne Simmonds and Kevin Westgarth.

First up, let’s do a quick recap of the event using our popular 10 Tidbits format (and we even include a little trivia question along the way)…

[UPDATE:  If you want to play the Frozen Fury Trivia Game, you may want so skip ahead by clicking here…then come back and read this article when you’re done…or you can cheat a little by reading this article first, as several of the trivia answers are included below.]

1.  Officially, this will be Frozen Fury XIII (that’s 13 people).  For all the superstitious readers out there, fear not…this is actually the Kings 14th trip to Sin City and will be their 15th game played in the city that never sleeps.

2.  Long time fans will remember the Frozen Fury prequel – or, Winter Classic prequel, if you will…back in September 1991 the Kings battled the New York Rangers outside at Caesar’s Palace.

3.  The Kings have picked up nine victories is 13 official FF games, including splitting the one and only two-game series back at the second FF.

5.  Los Angeles won both of those match-ups and has picked up seven more victories in the remaining 11 games vs. the Avalanche.

6. Anze Kopitar has registered at least a point in every FF game he’s played in.  His streak started in 2006 and now stands at seven points total (4 goals and 3 assists).

9.   Last year, Ryan Smyth became the latest player to have played for multiple teams in the Frozen Fury series.  It was his first game in Vegas as a King, after playing there in 2007 with the Avs.  (Trivia Question – Can you name the three players in FF history to register a point for two different teams?  The answer appears at the bottom of this article)

10.  MayorsManor will be on hand for all the festivities going on in Vegas.  Follow along on twitter – where we’ll be bringing you news and notes throughout the weekend, starting with the pre-game skate EARLY Saturday morning.

TRIVIA ANSWER:  Rob Blake, Adam Deadmarsh and Ian Laperriere.  All had points as members of the Kings and the Avs. (extra bonus info – Brad Richardson can join the club if he registers a point at this year’s FF.  He’s half way there, after picking up an assist with the Avs in the 2006 game.)
.