You are here: Home / NHL / Canucks / Welcome to LA – 10 Tidbits on Willie Mitchell 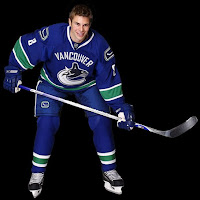 It’s been an interesting summer for the LA Kings in terms of roster moves.

While the July headlines were dominated with news on various left wingers, August will certainly be remembered as the month of D.

Just weeks after word surfaced that Matt Greene could possibly be out until November recovering from a shoulder injury, the Kings once-deep prospect pool suddenly thinned as reports indicated Colten Teubert and Vyacheslav Voynov were hurt as well and would not be ready to start the season.

Enter Willie Mitchell.  Earlier today, the Kings signed the unrestricted free agent to a two-year contract…beating out the San Jose Sharks and Washington Capitals among others.

Here are 10 Tidbits on the rugged defenseman…

* Mitchell was voted the Vancouver Canucks best defenseman in the spring of 2008 and 2009. He wasn’t able to achieve the hat-trick this year after being forced to miss the second half of the season due to a hit from the Penguins Evgeni Malkin in mid-January.

*  He openly criticized the NHL for their response to the hit that left him with post-concussion syndrome, saying “I’m not happy with the hit I took. We’re taught from a young age that you don’t hit from behind. I had my numbers facing a player in a dangerous zone, a dangerous spot, and he hit me. More than that, I’m disappointed in the league, disappointed in Colin Campbell.”  He went on to say that he thinks Campbell often “hands down suspensions and fines (based on injuries), and I think that’s the wrong thing to do. You rob a bank and there’s $50 million in there or rob a bank and there’s $5 in there, you’re going to jail for the same amount of time. (Campbell) saw me get up off the ice and didn’t make any ruling on it.”

* Excluding last year, Mitchell has been a pretty consistent player. He’s on the ice for about 22 minutes a night, plays 70+ games a season, chips in 2-3 goals a year, with 10 assists and about 75 penalty minutes. He’s a defensive-defenseman who understands his role and plays a physical game.

* He should fit right in Hollywood, as he’s already done an endorsement or two.  Here’s a link to a video of him repping Blade Tape.  Notice he again calls out the NHL, this time for the ice getting ‘progressively worse’ across the league in recent years…and for the very serious problem of “snow accumulation.”

* Never taking himself too serious, after Mike Keenan accused him of playing with an illegal stick, he showed up to the next game with a stick befitting Andre the Giant – video here.

* More on sticks… Although he’s referred to as a ‘warrior’ in some circles, he has the nickname ‘pickle’ stamped on his sticks…a reference to his love affair with dill pickles.  Seriously.

* More food news… He lists hamburgers as one of his favorite foods – so, coming soon, the “In-N-Out versus Skookum Chief” burger debate.

* He is now another former college hockey player on the LA roster.  The Kings continue to out-pace the league average in this department.  For all the hype surrounding Lombardi’s love affair with the WHL (Schenn, Hickey, Teubert, etc.), he’s also added plenty of former college players.  Mitchell went to Clarkson University in New York for two seasons, winning an an ECAC championship and earning playoff MVP honors in 1999.

* Like when Alex Ponikarovsky was signed by the Kings last month, Willie Mitchell will need to find himself a new number. Poni had been wearing #23 and he’s since switched to 27. Willie was recently wearing #8 in Vancouver, that’s been permanently stitched to Doughty’s jersey here in LA. Mitchell also wore #2 prior to that (in Dallas and Minnesota) – again, taken by Matt Greene. However, he broke into the league wearing…wait for it…#24 with the Devils. That just happens to be available at the moment. We shall see…

* Legendary CBC hockey commentator Don Cherry once had this to say about Mitchell’s play “They’re the warriors you win with.  Get into the playoffs – guys like him win.”

That’s exactly what Lombardi and the Kings are hoping for.

Video of the Malkin hit can be viewed by clicking here.