You are here: Home / NHL / Kings / Tuesday’s 10 Tidbits on the Hockey-n-Wrestling connection 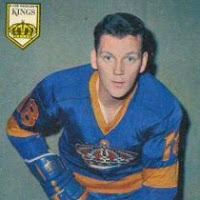 In 1985, in what’s billed as the World’s Most Famous Arena, Vince McMahon launched his version of professional wrestling into super-stardom, live from Madison Square Garden. Largely on the back of a “Rock-n-Wrestling” connection – fueled in part by a partnership with MTV – his World Wrestling Federation staged the first WrestleMania.

Fast forward 25 years…just a few weeks ago McMahon and crew were at the sold out Staples Center for SummerSlam, their annual mid-year spectacular. While connections to Cindi Lauper and MTV have long been removed from the on camera presentation, strong ties to the world of hockey still exist behind the scenes.

It only makes sense too. Professional wrestling has deep roots in Canada. And certainly there is nothing more Canadian than hockey, right?

Here in the U.S., many of the greatest wrestlers in history come from Minnesota, a state that promotes itself as ‘The State of Hockey’. Thus, the opportunities for overlap are similar to our friends north of the border.

Sure enough, in today’s 10 Tidbits article we take a look at several such connections, including at least two linked to the Los Angeles Kings.

1 – The most obvious connection between wrestling and the Kings is tied to a man considered to be one of the best wrestlers of his generation, the first ever unified world heavyweight champion, Chris Jericho.  His father was Ted Irvine (pictured), a member of the inaugural L.A. team in ’67-68.  Wearing jersey #15 that season, Irvine scored 18 goals and had 22 assists, including a helper on the first goal ever scored in Kings history (October 14, 1967).

[special trivia note:  Dean Lombardi will love this one…who were the Kings playing that night?  Wait for it… yes, the Philadelphia Flyers]

Chris himself skated at Staples Center once, playing in a celebrity hockey game that was part of the 2002 NHL All-Star Game festivities.

2 – Dave ‘the Hammer’ Schultz is a legendary NHL enforcer.  In fact, he still holds the single season record for the most penalty minutes (472).  Best known as a member of the Flyers’ Broad Street Bullies teams, he also played for the Kings, racking up 232 PIM in ’76-77. To put that in perspective, Raitis Ivanans led the team with 136 last season and the only Kings player in the last nine years to beat the Hammer’s total was Sean Avery.  Among the many things he tried his hand at post-retirement – in May 1994 he was the special guest referee for a WCW match in Philadelphia, PA, featuring Kevin Sullivan and Cactus Jack. 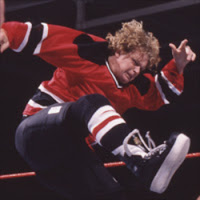 3 – In the summer of ’96, the WWF itself tried to get in on the hockey business.  Well, sort of.  They debuted a character called ‘The Goon’ on July 20, 1996, played by Bill Irwin.  His gimmick, besides fighting in full hockey gear – including specially made boots that looked like skates, was that he had been thrown out of every league for fighting, so he had to give up hockey.  Naturally, he turned to pro wrestling.  For the record, he didn’t last long there either.  The Goon is remembered by fans as one of the worst WWF ideas of all-time.  And that’s saying something!

Vince McMahon once said that The Goon “makes Claude Lemieux look like a Sunday school teacher” while calling one of his matches.

4 – Ric Flair, the 16-time world champion (well, it’s actually at least 17 times, but that’s a different story), had his first pro match on December 10, 1972.  The man across the ring from him that night in Rice Lake, Wisconsin was George Kosti.  Of the experience, Flair says “I went to the ring not knowing what was going to happen. I wrestled 10 minutes to a draw – the longest 10 minutes of my life!” What he didn’t note was that years earlier Kosti had been heavily recruited by one of the most famous junior hockey teams in Canada, the Regina Pats…and by one of the NHL’s Original Six teams, the Chicago Blackhawks.

5 – Another former WWE Champion and Hall of Famer, Bret Hart, owns a piece of the Calgary Hitmen.  In fact, their team name is taken from his wrestling persona, The Hitman.  Bret is known as ‘The best there is, the best there was, the best there ever will be.’  On the ice, the Hitmen are doing their part to live up it that moniker.  They finished last season with the most points in the WHL (107 points) and two of their players – both Kings prospects – led the league in statistical categories, forward Brandon Kozun (107 pts) and goalie Martin Jones (2.21 GAA).

6 – Stan Stasiak, former WWWF champion (the precursor to the WWF, now WWE), was said to have given up a promising pro career in hockey to pursue his passion for wrestling.  The big Canadian was signed by the New York Rangers, but chose the squared circle instead.
Interestingly, in the match where he lost his title to Bruno Sammartino at Madison Square Garden, it was the first wrestling gate to surpass $100,000.  By contrast, the SummerSlam event at Staples Center two weeks ago generated about $875,000 in ticket sales.

7 – The Dudley Boys, a very successful tag team over the last 15 years, winning multiple championships, were originally inspired by the iconic Hanson Brothers from the cult classic Slap Shot.

8 – According to Jericho’s book – John Ferguson, the General Manager of the Winnipeg Jets (precursor to today’s Phoenix Coytoes), was the special referee once for a steel cage match between champion Rick Martel and Russian Boris Zukoff.

9 – Perhaps the most well known wrestler in the world, Hulk Hogan, who has lived in Florida for many years now, was front and center during the Tampa Bay Lightning’s run to the Stanley Cup in 2004.  He even celebrated with the players ON THE ICE after they defeated Calgary in game seven of the Cup Finals.  Click here to see a picture of the Hulkster with Vinny Lecavalier immediately following the win.

[Honorary mention: If you watched any WWF programming in the 80’s, the man standing beside Hogan for nearly all of his big interviews was ‘Mean Gene’ Okerlund.  Well, his son Todd played for games on defense for the the New York Islanders!]

10- When the WWE (then WWF) was trying to get Minnesota native, Curt Henning, over as Mr. Perfect – an athlete that was perfect at every sport he tried – one of the video packages they produced showed Henning playing hockey against Mike Modano of the Minnesota North Stars.  To see video of this classic one-on-one contest click here.

Henning had previously gained fame in the American Wrestling Alliance, having beaten Nick Bockwinkel for the AWA world championship in May 1987.

Bockwinkel, also originally from Minnesota, is a true pro wresting legend.  He held multiple titles, both as a singles competitor and in tag team action – including with his long time partner, Ray ‘the Crippler’ Stevens.

We attempted to interview Mr. Bockwinkel for this article, however he’s currently out of the country for a few weeks.  We’re trying to set something up for when he returns to talk more about the Wrestling-n-Hockey connection (including him competing in many famous hockey arenas, such as the last AWA title match held in the old Winnipeg Arena).
Keep an eye out…