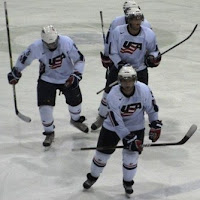 Nearly all of the best hockey players in the world make a stop at the annual World Junior Championships, held each year right after Christmas.

Both the Canadian and U.S. programs just completed their evaluation camps for this winter’s tournament. Yesterday, Kings prospect Kyle Clifford checked in with a report on what went down with Team Canada – including his comments on the five other Kings players who joined him in Newfoundland.

Today, we catch up with a few of the young stars that attended the rival’s camp…that of team USA, the defending champions!

Two first round selections at the recent NHL Draft in Los Angeles join us for this special report, Charlie Coyle (San Jose) and Nick Bjugstad (Florida). They have all the details of the happenings from Lake Placid, NY…including their thoughts on the play of Kings first round pick, Derek Forbort.

Only nine players from the gold medal crew were originally eligible to return this year.  That list was trimmed to eight when Cam Fowler opted not to attend.  Although he was a big part of last year’s team, he’s signed with the Anaheim Ducks (who selected him in the first round) and is expected to make a big push towards debuting this season in the NHL.

So, with John Ramage (Calgary) as the only returning blue liner, the door was wide open for guys like Forbort to make an impression.

In net, Jack Campbell, the under-aged goalie who started last year’s tourney as a back-up…and ended up between the pipes when the final buzzer sounded in the gold medal game…has returned.  He was also drafted in the first round this year, by Dallas, but is expected to be in the crease come tourney time.

And there were plenty of questions at center…which us brings us back to Coyle and Bjugstad coming in as first-time campers.

1.  What did the players think of their personal performances?  For starters, I asked about the final intrasquad game (blue vs. white), where Bjugstad had a hat trick and Coyle had two goals…

Bjugstad – “I kinda surprised myself that I could do that. I think we were down 3-1 at that point, so that was pretty cool. There were so many good players there, it was tough to separate yourself.  That certainly gave me some confidence throughout the camp though.”

Coyle – “I thought I was just going to come to camp and be a grinder. I didn’t expect to put anything on the board or anything. So, those two goals boosted my confidence. It let me know that I can play with these guys and that I can be a big part of this. Knowing that I could score and contribute definitely helped me out a little bit.”

2.  The following day the roster was trimmed from 42 to 28 players.  How were the nerves that night?

Coyle – “To be honest, I felt like I played well up to that point. I was playing a complete game and doing the little things I’m supposed to. So, I kinda had a good feeling. But, you never know.  There was still that that feeling of ‘This can go either way.’ I was a little nervous, but I felt like I was going to be staying there.”

3.  Were other guys sweating it pretty hard?

Coyle – “You could tell everybody was a little bit nervous. For the most part though, it seemed like everybody was calm. At least that’s what they were trying to show. I was rooming with Adam Clendening (2011 Draft eligible), who I happen to be rooming with all summer at school. We were taking about it a lot that night. He was kinda stressed. I felt we both played well, so we’d be staying. And it all worked out.”

4.  After the cuts, camp moved on to a double-round-robin series against the WJC teams from Sweden and Finland.  In the second game vs. Sweden (the only game the U.S. lost), it was said that some of the American players were getting frustrated with the officiating. Did the coaches say anything to you guys about not arguing with the refs?

Coyle – “It happens, when you have games where you feel like the ref isn’t on your side. I think everybody felt that way. There isn’t anything you can do it about though. And they weren’t the ones putting the goals on the board for them. It’s not their fault. So, the coaches said ‘Stop worrying about it. You can’t control them. Just try to play your game.’ But, that’s not what we were doing. We were worried about the refs and we weren’t playing our game.”

5.  The coaching staff was constantly mixing up the lines from game to game.  Did you find you had strong chemistry with any one or two players?

Bjugstad – “I wouldn’t say one guy specifically.  By them rotating things every game, you played with basically everyone. It was good to get a feel for what the other guys are like.  Every guy out there is top in the country, so it’s hard not to have good linemates.”

Coyle – “I played with a bunch of people.  But, when we played Sweden and Finland I was with Chris Kreider (NY Rangers) quite a bit and then for the last two games I was with Jeremy Morin (Atlanta).  I thought we played pretty well together.”

6.  Guys always wish they would have done more – yet, overall, did you meet the expectations you had for yourself going into camp?

Coyle – “Going in, I remembered watching the tournament last year…I knew camp wouldn’t be at the same level as the real tournament…but, I sill thought it would take a little bit of time to adjust to the level of play and the speed.  However, when I started playing, I felt like I kept up, was playing well and that I belonged out there.”

7.  During an off day near the end for camp…tell us about the wiffle ball game…

Bjugstad – “I’m not a big wiffle ball guy. But, another guy from Minnesota, Zach Budish (Nashville), hit a walk off home run. He probably got the MVP of the game.”

Coyle – “We had a 90 minute practice scheduled and I don’t think anybody was looking forward to that with all the hockey we had been playing.  They ended up cancelling that and we just had some fun getting to know the guys.  My team ended up winning.  I did alright, I think I hit a double.  Budish was the only guy with a home run.

8.  Nick, you led all campers with seven goals, so the output was there. How about the input, what information did you leave camp with?

Bjugstad – “The coaches stressed being focused and always being ready to play. I realized that as you get older it’s more of a mental game and you definitely have to prep yourself a lot more. Every shift you have to give everything you have or another guy will take your spot if you don’t work hard enough.”

9.  Who was the player you were most impressed with among the forwards?

Coyle – “Bjugstad and Brock Nelson (Islanders).  I’ve played with Bjugstad before, so I knew the type of player he was.  But, he put up a lot of goals.  I hadn’t seen Nelson before and he was impressive.  Kyle Palmieri (Anaheim) has a wicked shot.  That impressed me too.”

Bjugstad, what did you think of Charlie Coyle? – “He was a great player, used his body really well. He can score also, so he’s awesome. He works really hard, tough kid.”

Coyle – “We had some solid guys on D.  I’d go with Brian Dumoulin (Carolina) from Boston College.  [note: that’s quite the compliment coming from a guy heading to Boston University in the fall]  He’s not really flashy or anything.  But, when he has the puck you always know it’s coming out.  I hadn’t played with him before, so he impressed me.  I also liked Derek Forbort too from the U.S. National Team.”

So, how about Forbort…the Kings drafted him in the first round this year..tell us a little more about what you saw in camp…

Coyle – “He has some good size.  Maybe has some filling out to do.  But, he’s smart.  He knows what to do with the puck.  He’s very poised with it and always makes the right play.  Good all around player.”

That gold medal back in January was only the second ever for the U.S. at the World Jrs.  The previous team to do it, back in 2004, featured three standouts – Ryan Kesler, Zach Parise and Ryan Suter – who went on to help form the core of this year’s U.S. Olympic team.

In a recent interview here on MayorsManor, Marcel Dionne talked about building a team around a goalie, a defenseman and a center.  So, when you take those guys and add Ryan Miller in net, it really shouldn’t have been that shocking when they walked away with a silver medal in Vancouver.

As for the junior team, hoping to defend their crown in Buffalo this winter – well, they’ll have Jack Campbell back in net.  Check.

The Kings first round draft pick, Derek Forbort…and the entire defensive crew…seem to be getting solid reviews.  Check.

Down the middle, you have Bjugstad, Coyle and Nelson.  A recent camp article by Kevin Allen of USA Today featured this quote from Jim Johannson, USA Hockey’s assistant executive director, “If the three centerman are the real deal, and they have been so far, we should have a formidable group.”

Perhaps – check, check and check then.

This team looks to have a real shot at being the first ever back-to-back champs for the U.S. junior program.