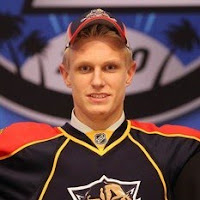 On a Saturday afternoon earlier this summer, things were lining up perfectly. Almost too perfectly.

Twenty one summers prior, Scott Bjugstad signed with the Kings after spending one season with the Pittsburgh Penguins.  While he scored only five goals over the next three years in Los Angeles, it still allowed him entry into a very small club – players who could say they were teammates with Mario Lemieux and Wayne Gretzky.

Two decades later, as the first round of this year’s NHL draft reached pick #15, Nick Bjugstad was still available.  Scott’s nephew could possibly be taken by his former team at #19…he just needed to survive four more picks.

Then, there was a buzz on the floor at Staples Center, followed by the Commissioner announcing a trade.  The Kings had worked a deal to acquire Florida’s #15 selection.  Had Dean Lombardi just traded up to take the 6’5″ center?

No, he ended up taking another defenseman – Derek Forbort.  However, in a twist of irony, Nick Bjugstad was taken by the Florida Panthers in the #19 slot, the one originally owned by the Kings.

Adding to the confusion, Nick says “After the draft I heard from several people that thought I was taken by the Kings, instead of selected in the spot the Kings traded out of. And some other people I know thought I was traded to LA right after I was drafted.  It was a little crazy at first.”

That June weekend was just another of the many high points Nick has experienced this year.  A few months prior he won the ‘Mr. Hockey’ Award as the top player in the state of Minnesota.  Just a few weeks ago he was one of the stars at the Team USA evaluation camp for the upcoming World Jr Championships.  And next month he’ll start classes at the University of Minnesota, his dream school.

In the interview below he opens up, taking us on a journey from his early days on the ice to his whirlwind summer.  There’s another Bjugstad headed to the NHL soon…so, get to know Nick…

As you look back now to those early days, what’s the most vivid memory that really stands out in your mind?

I remember playing outside all the time.  My dad would take me to the rinks.  He was in three straight High School tournaments when he played.  So, being a big hockey guy, he put me in skates pretty early.  I remember my feet freezing and he would take me into the bathroom and put my feet under cold water.  Then, I’d go right back at it.  Going to the outdoor rinks in Minnesota is a tradition and we did that a lot.

Near the end of the season you won the Mr. Hockey Award, which is a big deal in the state of Minnesota.  Did you start the year with that as a goal and do you now have your eyes set on the Hobey Baker Award (best player in college hockey)?

Well, winning the Mr. Hockey award was amazing because I’ve looked up to a lot of the guys that have won it.  I dreamt of it, certainly.  Yet, going into this year I was a junior (in high school), so I never really expected it.  Then, after I decided to accelerate my studies I was in the running for the award.  It definitely happened pretty fast.  It was a great experience and a great honor.  As for the Hobey Baker, that would be awesome to win too.  That said, you just have to take it year by year.  You can’t really look to far ahead.

[note:  Two former Kings, Erik Rasmussen and Trent Klatt, also won the Mr. Hockey Award.  As did Paul Martin, one of the biggest names in free agency this summer – ironically, signed by one of Scott Bjugstad’s other former teams, the Penguins.]

You’re over 6’4″ now, so it’s hard for people to miss you.  But, when did you start to realize “Hey, people are really starting to pay attention to me?”

I was never really that big growing up.  I was always mediocre in size.  Going into my freshman year I was about 5’9″ and then hit a growth spurt.  By the end of the year I was 6’2″.  I’ve just kept growing.  I guess it’s from my mom’s side, she has some pretty tall cousins.  So, it was probably my freshman year when I started getting looks and began talking to college teams.

Speaking of college teams, you’ll be starting at the University of Minnesota real soon…how closely have you followed their hockey program growing up?

I’ve always been a Gopher fan, so its been a dream to play for them. I’ve watched every season pretty closely as long as I’ve been into hockey. Plus, my uncle played there, so I expect it to be pretty exciting playing there.

You’re also a big Team USA guy, having played at the Four Nations tourney last year and you’ll probably be part of the World Jr team this winter…what does it mean to you personally to play for your country?

Putting on the USA jersey is quite an honor.  Knowing that you’re playing for your country every time you put it on gives you a little extra incentive.  So, you play hard every time you throw it on.

Assuming you watched the Olympics this year, who was your favorite player on Team USA in Vancouver?

Of course I did.  I really liked Zach Parise and Ryan Kesler.  David Backes is a fellow Minnesota boy, so I kept an eye on him too.

How about some American legends from prior Olympics – Mike Modano or Jeremy Roenick?

Going back to the draft, you were taken by Florida.  However, you haven’t been able to spend much time with the Panthers organization because unlike most other clubs, they didn’t hold a summer camp for rookies this year.  Did they give you any reason why?

They said that with hiring a new GM this summer they just didn’t have time to line things up. They have a rookie camp coming up in September, but obviously the college guys won’t be able to attend that session. They’re going to have one next summer though, they just took this year off.

Prior to the draft you went up to the combine in Toronto, where you did very well in the physical testing – placing in the top ten in 12 different categories (including 2nd in bench press). Was that something you were aiming aiming for or it just ended up that way?

I’ve been training since my freshman year in high school We had a really good trainer there (Baine High School) and he’s done a good job with me. I knew that physical strength was really important, so my training just led up to those results. We worked really hard the couple of months before the combine and it definitely helped too.

Interviews are always a big part of the combine also. Let’s do one of those questions they may have asked you there… If you received a phone call saying you had to leave your house in five minutes and could never go back, what three things would you have to take with you?

My fishing pole, my ipod and a hockey stick I guess.

With the draft being held in LA this year, we asked several of the prospects for their celebrity look-a-like…who is yours?

Lately I’ve been told I look like the Russian guy from the Rocky movies, Ivan Drago.

Excluding NHL players past or present, who would be one celebrity or sports figure you’d like to play hockey with?

I look up to Barack Obama, that would be fun to play with him.

Nick Bjugstad currently has three teams – the Gophers, Team USA and the Panthers.

If all goes right for him, maybe someday one of those teams can help him get a visit to the White House for a championship ceremony…and who knows, perhaps he’ll even talk his way into a game of pick-up hockey with the President.

Interview w/ Seth Ambroz – committed to U. of Minnesota and probable 2011 first round draft pick

WJC 2010 Guide – What You Need to Know – links/notes on key players in the tournament (Forbort, Schenn, Kitsyn, Coyle, etc.)
.