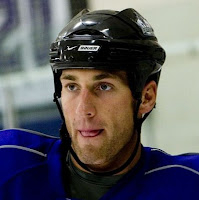 More than three months have passed. That’s plenty of time for the Kings 101-point fever to subside.

Coming off their best regular season since ’90-91, the team was entering the playoffs for the first time since 2002. A lifetime ago, given the turnover in the front office and with player personnel.

When you watch a game without emotion, you see things differently. Considering what it took to get there, it’s easy to understand why people may not have watched this year’s opening playoff game with a clear mind. Would the benefit of time passing and the outcome no longer on the line provide different insights and observations from the game?

Bob Miller described his feelings entering this game as “When you’re not in the playoffs it’s like you’re out of the loop in the NHL.”

So, thanks to the NHL Network’s replaying of the Kings 2010 playoff series, it was time to rejoin the other 15 teams invited to the NHL’s second season.  Specifically, it’s a re-examination of LA-Vancouver…Game One from north of the border.

note: these comments were jotted down in running time, without editing after the fact…the times indicated are clock time, not game time (for the sake of simplicity while watching)

* What was up with Luongo “throwing” his stick to make a save in the opening minutes?

* Overall, Jarrett Stoll is playing better than than I remembered – strong on face offs, playing his man effectively, etc.

* Nearing the half way mark of the 1st and the play of several Kings are starting to become worrisome – Justin Williams looks flat footed and isn’t playing the puck well; for every nice play by Randy Jones he follows it up with a bonehead decision (i.e. a nice clearing play behind the net of Quick, then he he stands at blueline and can’t keep puck out of his zone): Jeff Halpern looks slow.

* Quick was on his game in the 1st – looked solid.  Not the same guy that was between the pipes for the last few weeks of the regular season.  The memo that went out saying ‘Need to raise your game in the playoffs.’ was received and he’s responding accordingly.

* Can’t believe I’m saying this (or just saw this), but Ivanans should have scored with 10:26 left in the 1st.  Probably the best shift I’ve ever seen him take in his entire time with the Kings.  Not just the scoring chance, but the hustle.

* 3:06 – Jeff Halpern gets the first penalty of the game.  Fine.  Yet, how did they not call the high sticking right in front of Luongo about a minute earlier? Sami Salo high sticked / punched Williams right in the face.  Salo seems to be playing extra aggressive tonight.  Minutes later Burrows starts running his mouth and appears to a bit of baby. Can dish it, but overreacts when on the receiving end.

* Demitra gave Doughty a nice smush to the face as the horn sounds to end the first period.  The announcer says shots are 11-5 favoring Vancouver.  How?  Sure didn’t feel like they had twice as many shots as the Kings.  Seemed pretty even. Time in the offensive zone probably favored the Canucks, but twice as many shots?

* An interference call on Alberts in the final seconds of the first carries over to start the second.  Stoll scores a beautiful PP goal to put the Kings up 1-0.

* Fantastic play by Scuderi to save a goal when the puck got past Quick.  Scuds reached behind him and deflected it away.  When Vancouver scored a few shifts later, why was Halpern on the PK?  His poor positioning contributed to the goal.

* Scary play with Kopitar’s stick was stuck under the visor of Sedin33.  Could have done some serious damage.  It wasn’t intentional, total accident, but still.

* Doughty is giving a few receipts for the Canucks rough play in the first.

* Williams bad play in the offensive zone leads to a turnover and three seconds later Sedin22 puts Vancouver up 2-1.  Minutes later there is another bad play by a flat footed Williams.  He’s getting killed out there – including major damage to his body with about 9:30 left, when he’s on the receiving end of a crushing check into the boards.

* As noted in the first period, Burrows is a whining baby.  Wow.  Now Alberts tries to kill Richardson in the corner.  Major penalty, ejected from the game.

* Jack Johnson hasn’t looked impressive so far, dare I say he’s getting worse as the game goes on?  He did not have a good opening few minutes on the major PP – including a way-wide shot, missing a pass from Jones and then making a bad pass to Jones.  Within moments Kings fans everywhere probably forget everything that just happen because Modin ties the game!  Dustin Brown set it all up with great hustle to protect the puck.  Then a beautiful pass from Frolov behind the net to Modin out front.  Goal.  Tie game.

* Doughty takes a penalty with about 4 minutes left.  Second questionable call against the Kings in a game that for the most part has been allowed to develop without referee interference.  Second period ends still tied, 2-2.

* The Kings have been physical throughout the game.  However, it seems like Vancouver has initiated nearly all of the physical interaction, with LA simply reacting.  The Kings need to toughen up in this area.  It’s not a knock on the skill guys.  Just a note that next year they should benefit from guys like Clifford and Westgarth in the line-up.  Now, if they could just add another physical dman (preferably a vet, not a kid) they might be in business.

* Kings got away with one, should have been a penalty for too many men on the ice (coincidentally, the penalty de jour this spring).  Considering the two bad calls earlier against LA, the Kings are now even, 2-2 in the battle with the refs.

* 12:22 – Kopi has played better defensive than I probably give him credit for.  At the next whistle the color guy says “Kopitar is not known for his defensive abilities, but…”

* Jack lost the puck AGAIN at the blue line after a soft pass from Brown.

* Kings seemed to spend the overwhelming bulk of the third on defense.  The offensive pressure they were providing early in he game wasn’t there.  Or as Jarrett Stoll put it “We weren’t making plays in the third.”

* End of regulation. sudden death overtime coming up.  Or, if this was the UFC, they’d call it sudden victory.  I kinda like that better.

* Stoll could have won it about a minute into overtime.  Then, at 16:30 Simmonds has a nice shot on goal.  Where has he been the last two periods?  He was visible in the first, don’t remember him much in the last 30 minutes of regulation.

* 16:00 – great save by Quick…you couldn’t have asked for anything more from him so far in this game.  Rock solid in net.

* 13:50 – Jack jumps into the play with Smyth, ends up firing away at a rebound in the slot…somehow it doesn’t go in, just straddles the line.  Luongo with an incredible save.  Now with Jack caught deep, Vancouver flys down the ice with the puck and Doughty bails out Jack with a great save.

* 11:45 Randy Jones finally makes a costly mistake.  Guarding the blueline in the offensive zone, he can’t keep the puck in.  The Canucks grab the puck at center ice and start buzzing…four Kings are all watching the puck when they take it down near Quick…nearly everybody is down low, with their backs to the blueline.  Jack is one of them.  He’s in the slot, had he been turned around and watching the two players behind him, he probably could have prevented 26 from skating in and scoring.  Jack couldn’t react in time once he turned to see him coming in.  Goal Vancouver, game over.

* Final comment, in the media-voted “three starts of the game” they went with Quick for the third star.  Very well deserved.

Sure hope the Kings can turn things around in game two.  Wonder what happens?!?