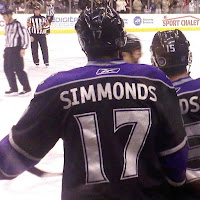 Yes, it’s true…as of 7am this morning, Wayne Simmonds is still listed as #17 on the Kings roster.

One of the many fascinating rumors surrounding the last few weeks of the Kings’ negotiations with Ilya Kovalchuk was that Simmonds had been asked to change his number, should the Kings sign Kovy.  It’s now a moot point.  The Russian superstar signed a bazillion dollar contract yesterday to stay with the Devils, leaving Wayne the Train still in possession of his coveted diecisiete.

After sleeping on it for a night – that’s real popular in the hockey world these days – let’s take one final spin around the Kovalchuk merry-go-round.  Then, we can finally put this thing to bed…well, until October 30th when the Devils come to town.

For now, here are 10 Tidbits from across the web…file it under ‘The fallout on Ilya’s deal with the Devils’ –

* Adam Proteau of The Hockey News still isn’t 100% convinced that Kovy will work out long term in New Jersey.  However he has tons of praise for Devils’ GM Lou Lamoriello, saying “What isn’t up for debate is that Lamoriello is as dangerous and dogged of an adversary as any GM in the league.  He might look and talk like a benevolent librarian, but inside that serene demeanor beats the bulging heart of a competition junkie that aches for its next talent fix.”

* Ken Campbell, a senior writer at The Hockey News added – “The fact is, the Kings wanted Kovalchuk badly, just not badly enough to blow their brains out and potentially compromise their roster for the next decade.”  He likes GM Dean Lombardi’s plan to build through the draft and applauds him for not throwing away his plan mid-game, with quotes like “Some people pay lip service to building through the draft, then look at their roster and, for example, deal two first round picks for a 40-goal scorer who might not make the roster appreciably better.  Kudos to Lombardi for not getting sucked into that way of thinking.”

* Craig Custance of Sporting News somewhat echoed Campbell’s thoughts in his Loss in Kovalchuk Sweepstakes Also Could Be Kings’ Gain article, writing things like “Rather than give Kovalchuk the $100 million he was looking for, Lombardi walked away. In doing so, he made sure the Kings could remain competitive for the next decade because here’s the thing: Right now, the Kings don’t need Kovalchuk.”

* In reference to not offering a $100-million deal, Dean Lombardi said “When you’re dealing with the cap, the idea is to take your best shot and push the envelope as far as you can. But you have to be prepared to walk away.”

* Tim Leiweke, chief executive of AEG, told the Times – “We threw everything at him we had while leaving the cap space necessary to sign our kids. He is a great player and I am disappointed he didn’t come to LA. It was not for lack of effort or cash.”

* Regarding the widespread perception that Leiweke wanted Kovalchuk more than Lombardi did, Helene Elliot of the LA Times wrote that Lombardi wouldn’t bite, just saying “I think there’s a business side and a hockey side to everything, and the key is to make it all mesh.  There are relative degrees of ‘want.’ I’m not going to worry about that.”

* In a conference call with the AP, Jay Grossman (Kovy’s agent) refused to say that Kovalchuk decided to stay in New Jersey because he felt that gave him a better chance to win a Stanley Cup – instead saying “Obviously his goal is to win the Stanley Cup. If he didn’t think there was an opportunity to do that, then he would not have gone (to visit LA).”

* Newly hired Devils’ coach John MacLean said “He signed here for a reason — to try to win a championship. This organization has a good history of that, so you know he wants to be part of the team” and added “I have not heard from anybody throughout the organization a bad word about him. He’s a tremendous teammate and addition. He’ll have no issues playing for the team.”

* Devils’ all-world goalie Martin Brodeur told TSN that he doesn’t understand why some players around the league say they wouldn’t want Kovy on their team.  Marty thinks he’s “a lot of fun to be around” and when he asked former teammates, like Dany Heatley, about Kovy – they “all had good things to say about him.”

* The New York Post believes that with Kovy and “the acquisitions of Jason Arnott, Anton Volchenkov and Henrik Tallinder, the Devils are a far more formidable team than the one that won the Atlantic Division title last season.”

As for the Kings, where do they go from here?  Names like Patrick Sharp (Chicago), Marc Savard (Boston) and Ryan Malone (Tampa Bay) immediately started floating around the internet.  There’s also some unrestricted free agents still out there – Paul Kariya, Teemu Selanne and Alexei Ponikarovsky to name a few.

However, just like with all the Kovalchuk “news” you read over the last two-plus weeks, it’s all conjecture.  Lombardi will do what he always does, work the phones and try to improve his team.

One thing he won’t do – panic.

You might be in a hurry for a move, but Lombardi isn’t.  He doesn’t make deals for the sake of making deals.  When the right opportunity presents itself, he’ll take action.

Have some faith.  The Stanley Cup has never been won in July…or August.

IN DEAN WE TRUST