You are here: Home / Interview / Tuesday Tidbits… the interviews 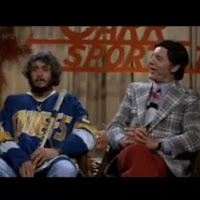 Looking back…here are 10 of the most popular interviews from this past season, where The Mayor touches base with a variety of people around the world of hockey for their perspective…

Luc Robitaille – The King of Kings stopped by MayorsManor a few days before his Hall of Fame induction…topics include Barry Melrose, Wayne Gretzky, Bruce McNall, the Stanley Cup, having a trophy named after him, why he signed with the Red Wings, Gary Bettman, hockey memorabilia, etc. To read 20 Questions with #20 click here.

Mike Modano – As the all-time leading goal scorer among American born players, he is a true hockey legend. The Mayor and the former Dallas Stars captain spoke about winning the Stanley Cup, the team’s move from Minnesota, not playing in the All Star game, almost signing with the Boston Bruins, being dissed by the Predators, getting knocked out by Mark Messier and lots more – click here to read the full interview.

Andy Murray – He went from being a virtual unknown to the most successful coach in Kings history. After three trips to the playoffs and with the team above .500, despite being riddled with injuries, he was let go with just a handful of games remaining in the 2005-06 season. In his MayorsManor interview we talk getting hired and fired by the Kings and all things in between, plus his sons, his favorite players, the Kings player he’d most like to have on his NHL team and tons more. Click here to read.

Rob Blake – Love him or hate him, he’s a big part of Kings history.  The Mayor gets Rob’s thoughts on being drafted by the Kings, going to the Finals in ’93, the trade, resigning the Kings captaincy, coming back to LA and so much more. Click here to read it now.

Kelly Hrudey – The man forever linked with the Kings trip to the ’93 Stanley Cup finals chatted with The Mayor about the playoffs, his relationship with Dean Lombardi, teams that gave the Kings fits back then, being drafted by the Islanders, his first training camp in New York, underrated players and Robb Stauber stealing his job – click here to read the full interview.

Ethan Moreau – A first round draft pick in 1994, he discussed his time with the Blackhawks, the trade that brought him to Edmonton, the pressure of being the Oilers captain, going to the Stanley Cup finals in 2006, Chris Pronger, the firing of Craig MacTavish and yes, we even talk about his semi-nude photo shoot for ESPN – click here to read the full interview.

John Buccigross – ESPN’s guru of hockey talks with The Mayor and gives his take on all the teams in the Western Conference, the greatest hockey game he ever saw, his favorite arena, changes he’d make to the game if he was the NHL Commissioner and other quirky puck related tidbits – click here to read the full interview.

Colten Teubert – A first round draft pick from the 2008 draft, Mr. Nasty just finished up a stellar junior career.  He also helped lead Team Canada at the World Junior Championships and played for the Kings ECHL minor league affiliate in Ontario.  In his interview with The Mayor he talks about being drafted, being a prospect and his dreams of playing in Los Angeles.  Click here to read Tuesdays with Teubert.

Gary Shuchuk – Prior to playing for the Kings in the early 90’s this hard working grinder led Wisconsin in scoring and won the NCAA hockey championship.  Two years later he won the AHL’s Calder Cup.  He stopped by Mayors Manor prior to the 2010 Frozen Four to talk about his time in college hockey – which included playing with Tony Granato, Curtis Joseph and Mike Richter to name a few. Read it here.

Others of note:
Bob Miller – legendary Kings announcer stops by for a preview of the 2010 Stanley Cup playoffs

2010 NHL Draft – several prospects stopped by MayorsManor in the week leading up to the draft in Los Angeles, including Cam Fowler (1st round pick of the Anaheim Ducks)

Now if we could just get that guy from Slap Shot…