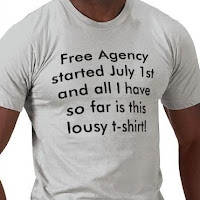 Media outlets across the nation were running their annual “Christmas in July” headlines on and around the July 1st opening of free agency.

However, comparing the last 12 days here in LA to Christmas would bring back horrible memories of that year you just knew you were getting a bike…only to end up with a cheap knock-off of the cool G.I. Joe your friends all got the year before.

In a town known to move at the speed of light, patience is not something that most Angelenos posses…yet alone, even understand.

A few months ago the Kings made the playoffs for the first time since Andy Murray was still coaching here and Ziggy Palffy played forward.  No matter, their brief post season appearance was enough to push expectations for next year to almost unattainable levels.  Fans want to win…and they want to win now.  Nearly as much…they want a superstar.

Bruce McNall, former owner of the Kings, knew that in the late 80s when he traded for Wayne Gretzky.  He talks about it in his book Fun While it Lasted, saying “Los Angeles is not the kind of town where a workmanlike performance gets you very far.  You’ve got to have glitz, glamour and superstars…”

So, it isn’t that surprising to hear fans have been acting like a 7-year old on December 15th, searching for where their parents hid the Christmas presents.  Remember the game you would play with some crazy relative – usually your sister or an aunt?  They’d give you clues about the gifts you’d be getting.  You’d never fully believe them though becuase sometimes they’d give you bad info.  You’d search the house, wanting to see proof for yourself.

Well, you’ve been playing that game for over a week now – this time your sister has been replaced with the various “experts” and “insiders” telling you that Ilya Kovalchuk was landing in LA, only for the deal not to get done yet.  That hasn’t stopped you though.  You keep searching…you just know the real inside information on the Kings negotiations with Kovy is around here somewhere.  And you’re going to keep searching until you find it.

Fortunately for you, there has been plenty of information to digest.  Although…about the only place Kovy info hasn’t been heard is at the drive-thru at Taco Bell (inside joke for long time readers of LetsGoKings.com).

Kovy’s signed. No he’s not, negotiations are off. Wait, they’re talking again.  Nope, false alarm.  Wait – that was bad info.  They are indeed talking, just neither side likes what they’re hearing.  OK, done and over.  Both sides are looking elsewhere.  Wait…I think they’re…

Are they?  Of course they are!

Have the Kings made ANY OTHER moves yet?  No.  Why?  Simple, this thing needs to be brought to a full and complete stop before moving on to plans B, C and D.

For now, there is one thing going on…regardless of what you read elsewhere.  Plan K.

This plan is easy to understand, even though it may take a long and complicated road to get there…

If Dean Lombardi can get Kovy to sign with the Kings, Los Angeles hockey will officially be back on the map.  While Crosby and Ovechkin have dominated the headlines in recent years, anybody looking at the numbers will see that Kovalchuk has the second most goals in the league over the last five seasons.  Put that guy on a team like LA…in a star-driven town like LA…and the Kings will start to get noticed again.

Perhaps later today will actually be Kristmas in July.  And just like tradition would have it, the 12th day would be the best day…the day Kovy signs.

Then, it would be up to the kids.  Guys like Kopitar will need to continue improving, just as Lombardi expects them to…then, maybe…just maybe, the Kings will be able to live up to the hype that is already mounting…like this note from NHL.com on Sunday evening:

“If the Kings are finally able to land Kovalchuk…they would instantly become Stanley Cup contenders.”

With Kovy in town to meet with Dean today, it Kould happen.