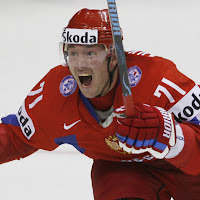 With one giant tweet from the New Jersey Devils earlier this morning “the decision” was known…Ilya Kovalchuk was NOT coming to Los Angeles.

After weeks of speculation, posturing and contentious negotiations, things were over.  Kovy was staying in New Jersey.  He wasn’t worried that Snookie and the Situation packed up and left for Florida.  They still had Martin Brodeur…and that was enough for him.

What does this mean for the Kings?  For starters, the details of the back and forth conversations will probably never be known, so don’t get caught up in what you read on the internet.  Were the Kings interested?  Yes.  Lombardi and team let that be known.  Was Ilya ever really interested in LA?  We’ll never know.  And it doesn’t really matter at this point.

The most important thing is this…the Kings are a team on the rise with a lot of contracts needing to be worked out in the next two years.  Drew Doughty and Jack Johnson are far more important long term than Ilya was short term.

Yes, the Kings need offense.  They need help on the wing.  They need help at center.  And if you forgot how important 5 on 5 scoring is for the Kings right now, you can rewatch the recent LA vs. Vancouver playoff series starting Monday on the NHL Network.

Offense is a problem.  It will be fixed.

There is still plenty of time too.  Training camp doesn’t open until September.

Everything will be fine.  The world isn’t coming to an end.

Kovy’s “no” to LA means the Kings will be fine.  Lombardi didn’t bite on the large, long term contract that could have, should have, would have made it difficult to maneuver in the future.

Will the Kings be alright?