You are here: Home / NHL / Kings / From Greene to Brown to Blue Heaven on Earth 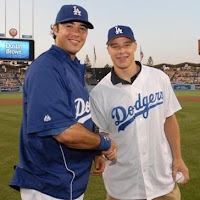 The race is on.

While casual sports fans looking at the Dodgers and Kings may see two entirely different franchises, their recent narratives have been quite similar.

Over the last few years both teams have stock piled young talent at key positions.  Additionally, both hired former executives from hated NoCal rivals to fill their then-open General Manager positions – as Dean Lombardi was once the GM for the Sharks and Ned Colletti served as the Assistant GM for the Giants.

Both men have come under fire at times for some of their trades and free agent signings.  And in 2010 both GM’s have had public…um, disagreements…with one of their youthful, budding superstars – Colletti challenged Matt Kemp’s play on the field and Lombardi ruffled the feathers of Jack Johnson when he questioned the coaching JJ received in college.

The comparisons could continue…yet, when all is said and done, one key fact remains.  Since the Kings entered the NHL in 1967, the Dodgers have won two championships for Los Angeles (’81 & ’88)…while the Kings came away empty in their lone trip to the Finals back in ’93.

However, most sports fans tend to have a ‘What have you done for me lately?’ mentality.  Thus, the slate is virtually wiped clean of history.

So, in present times…with both teams perhaps on the cusp of something great…the race is on. Which organization will be able to capitalize first on their current crop of high-end talent, bringing a championship to their fans?

Interestingly, each team actually needs the opposite component right now to take the next step.  The Dodgers desperately need some defense – in the form of pitching.  Meanwhile, the Kings will leave no stone unturned this summer in their search for more offense heading into next season.

And say what you will about either GM, one thing is for sure though…both organizations are in far better shape today than they were a few years ago before Dean and Ned took over the reigns.

Which brings us to tonight… the two teams have been friendly of late, with each hosting the other and utilizing various cross marketing promotions the past few seasons.

Later that summer, Dustin Brown stopped by Chavez Ravine to throw out the first pitch.  The Dodgers won that game 5-3 over the Milwaukee Brewers.

Then, last summer two players from the Kings came out to the Stadium, with Matt Greene throwing out the first pitch this time…and Jarrett Stoll playing catcher (little known fact, Greene beat Stoll in a game of rock, paper, scissors on the ride over to determine who would play Fernando and who would play Scioscia…or who would play Nomo and Piazza, if you’re from a different generation).  The Dodgers won that game too, beating the Houston Astros 4-3.

Eager to tempt fate and see if the good karma would still work in reverse, the Kings hosted the Dodgers back on December 12th.  Things kicked off with Eric Karros, LA’s all-time home run leader, dropping the ceremonial first puck. Fortunately, the Kings were able to pick up a victory too – downing the Dallas Stars 3-2 in a shootout.

The Kings’ front office must have been thinking ‘This is a sure thing!’ – as two months later they invited Andre Ethier over to drop the puck at Staples Center before the game against the New York Rangers (Feb 2).  Guess what?  The Kings won again, this time by a final score of 2-1.

Thus, there is a lot of pressure on Brown and Ethier tonight (pictured above).  That’s a perfect 5 for 5 so far.

Brownie will throw out the first pitch at 7pm and ‘Dre will be one of the key guys expected to carry the load offensively vs the Cubs.

Will the Kings-Dodgers magic lead to a sixth consecutive victory?