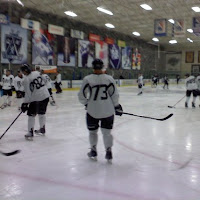 Today was the third and final scrimmage at the Kings annual Development Camp.

The teams have been the same all week…for the complete rosters click here.

While it was mostly “bigger names” that stole the headlines at Wednesday’s scrimmage (i.e. Holloway, Jones and Weal), some of today’s highlights belonged to non-roster, camp invitees.

Zach Harnden, an undrafted winger out of the OHL, started the scoring.  He beat highly-touted prospect Martin Jones to put Team Black up 1-0.  It was a nice shot, from his knee (ala Cammi) about 10′ to the left of Jones.

About five minutes later, Samuel Groulx (an ’08 pick by the Sharks), scored to make it 2-0 Black.

At half time (there are only two periods for scrimmage games), three things had become obvious:

1) Sean Bonar, a goalie who wasn’t selected at last weekend’s NHL draft, looked much better today.  As I reported on Wednesday, he looked dazed and confused in the first scrimmage – wasn’t seeing the puck well, was giving up bad rebounds, etc.  Well, he bounced back in a big way today.  You could see he was playing with more confidence…and it grew as the game went on.

2) Oscar Moller came to play.  Right from the opening faceoff he was flying.  He was very fast and extremely creative with the puck.  One thing that’s impressive when you watch Moller is, despite his size, he just keeps coming back for more and more punishment.  I’m sure he’s heard the “you need to work hard every shift to make it in the NHL” mantra, yet I just don’t see a place for him on the Kings.  He’s not a top-6 guy and his size makes him a waste on the 4th line.

3) Nicolas Deslauriers is under-rated when most people talk about the Kings young defensive prospects.  Guys like Teubert, Hickey and Voynov may be the names on most people’s minds.  However, don’t overlook the ’09 3rd rounder and former Luc Robitaille award winner.  He had a strong rookie camp last September and has looked sharp this week too…very smooth with the puck and reads the play well.

Other notes of interest:

*  Like Jordan Weal on Wednesday, Tyler Toffoli was out to impress (#73, pictured above).  Sure, he’s a fan of Justin Timberlake and Taylor Swift…but, don’t hold that against him.  The boy can play.  After being a late scratch on Wednesday, the recent 2nd round pick by the Kings was on the ice today and put his dazzling offensive abilities on full display.  He scored the only goal for his team…late in the game, making it 2-1…and was robbed point blank in the final minutes of the contest by Bonar, on what was clearly the save of the game.

* Garret Roe, a 5’8″ left wing who was taken in the 7th round back in ’08, did not have a good day.  He was getting pushed around every time he was on the ice…and not just by the bigger kids from his age group…often by younger, taller players.

* Moller missed on the only penalty shot awarded in regulation.

* Although the game ended 2-1 in favor of Team Black, they still had a shootout after the two periods were over.  Guys like Weal, Moller, Tofolli and Trevor Lewis all missed…out of the 10 shooters total to take a turn, only Bud Holloway and newly acquired Maxim Kitsyn (6th rd ’10 draft) scored…both roofers.

* Spoke with Coach Murray for a few minutes after the game.  He said he was very impressed with the goaltending today, especially considering it’s the middle of summer.  Of the five new draftees in camp, he likes what he has seen so far out of first round selection Derek Forbort.  He said “Of course he needs to continue maturing physically, but he skates very well for a player of his size.”

Eat that last smore please.  Them put out the fire and pack up the tents.  Camp is over.