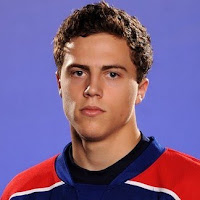 As you probably already know, this is a busy week in Kings Nation…the draft has just finished, prospect camp is now underway and in one week from today the Kings roster should look quite different than it did just two months ago when the season ended.

There will be plenty of time to dissect and over-analyze the roster moves later this week and on into the weekend.

For now, here are 10 Tidbits to wrap-up the first ever NHL Draft held on the West Coast:

* In the second round the Kings selected the other Tyler – Tyler Toffoli. NHL Central Scouting and TSN had him projected as a first rounder.  After all the shuffling took place in the first round Friday and players started falling, Dean Lombardi and crew jumped on him mid-way through the second round on Saturday.  It cost them an extra pick to move up two spots though, as they packaged their second (#49) and fourth (#109) to get the #47 pick used on Toffoli.

* Expert analysis… TSN’s Bob McKenzie said “The knock on Ottawa 67s winger Tyler Toffoli is that he’s not a great skater, but he didn’t have a big problem keeping up with his Team Canada U-18 linemates Tyler Seguin and John McFarland, two of the better skaters in the draft.” and Director of NHL Central Scouting, E.J. McGuire, added “He’s got an NHL release and incredible accuracy with his shot. An equal threat whether he’s dishing the puck or shooting the puck himself.”

* Toffoli lists his favorite TV show as 90201, so he’s ready for life in Hockeywood.

* He’s also been invited to Team Canada’s World Jr Championships evaluation camp later this summer.  Joining him there will be a slew of fellow Kings prospects – forwards: Kyle Clifford, Brayden Schenn and Linden Vey; along with defenseman Nicolas Deslauriers and goaltender Jean-Francois Bérubé.

* Jordan Weal (pictured above), the Kings third round selection, was another player who most experts had pegged going earlier.  While some might say he had an outside chance at cracking the first round, everybody seemed to agree that the second round was a very realistic possibility.  TSN had him projected at #48 and The Hockey News had him slotted at #41, nearly a full round ahead of when Lombardi was able to grab him at #70.

* He already knows at least one other Kings prospect pretty well.  Jordan has been playing his junior hockey with Colten Teubert of the Regina Pats in the WHL.  Teubert had this to say when I asked him about Weal – “He’s one of the most competitive little guys I know. He’s got a knack for putting the puck in the net and he’s a great playmaker.”  And the stats back up Teubert’s statements…Weal finished with 35 goals and 102 points, third best in the WHL this season.

* The pick used to take Weal originally belonged to the New York Rangers.  Ironically, the Kings acquired that pick by trading away perhaps the tallest Kings selections ever – 6’7″ Brian Boyle.  This time around they used the pick to draft Weal, who at 5’9″ is one of the shorter players they’ve drafted in recent memory.

* The Kings took a breather for awhile after selecting Weal, with more than two full rounds going by before they were up on the board again at #148.  With that selection they went back to the U.S. and back to defense, taking Kevin Gravel (joining first round pick, American dman Derek Forbort).  Hockey’s KG will attend St. Cloud State in the fall, after fielding offers from other top-20 college programs, like Michigan State and Northern Michigan.  His dad played at St. Cloud, so the final choice probably wasn’t too hard for him.

* He’ll be joining another Kings prospect on that team…Garrett Roe, a 7th round selection by LA at the ’08 draft.  They can get to know each other better when both attend the Kings Prospects Camp in El Segundo this week (more on that in a few days).

* Lombardi had one more trade up his sleeve before the draft was over.  He packaged the #169 and #199 picks to move up to #158 so he could snatch up Maxim Kitsyn.  Prior to the Kings acquiring that pick, who owned it you ask?  The Atlanta Thrashers, a recent employer of Ilya Kovalchuk.  Heard that name much lately?