You are here: Home / comments / Prospect File: The Buzz on Muzz’ 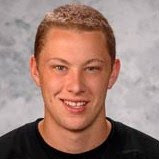 We’re about ready to start ramping up our draft coverage heading into the big event next weekend. However, before we move forward with the 2010 class, let’s take a look back at one of the more recent missed opportunities via the NHL Draft.

Jake Muzzin, a 6’2″ defenseman playing for the Sault Ste. Marie Greyhounds, found himself back in the draft last June…after not being signed by the Penguins, who had originally drafted him in 2007.  When all 30 teams were given a second crack at him – seven rounds came and went, his name was never called.

Then, Nashville invited him to training camp last September. Ultimately, they passed on him as well.

Kings President and GM Dean Lombardi is hoping the third time (or team) is a charm – he swooped in and signed him as a free agent back in January. A few months later Muzzin was named the OHL’s Most Outstanding Defenseman. He then went on to play 13 games with the Manchester Monarchs during their recent playoff run.

Now, the Muzz’ is getting plenty of buzz – with some reports saying he has a chance to make the Kings roster next season.

So, I spoke with a couple of people that should know what the kid is all about…take a look at what they had to say about Jake Muzzin…

A former Greyhounds executive who was part of the team that selected Muzzin in the first round of the ’05 OHL draft: Jake is a horse – he is a big strong young man who competes every shift. He has always had a heavy and accurate shot. He logged an extraordinary amount of ice time…playing in a shut down role versus Tyler Seguin and Taylor Hall 12 times a season. In addition, Jake was counted on for a lot of offense in the Soo. Of course, there will be an adjustment for him to the size and speed of the game at the pro level but I think he has a bright future with the Kings organization.

His defensive partner this season, Brandon Archibald: Muzz is a big, strong guy and expect some big hits to come out of him. He has a great shot and will produce some offense. He also is very reliable in his own end.

Another teammate this season, defenseman Brock Beukeboom: Jake is a great leader. He leads by example and couldn’t have done a better job for us this season. Every team needs a Jake Muzzin.

Greyhounds GM Dave Torrie:  The Kings made a real astute signing in getting Jake as a free agent. Jake is ready for the pro game on the ice and his attitude and maturity will allow him to be a great teammate. Like many young players Jake’s game needs to continue to mature and adjust to each level that he reaches but I do feel that Jake will play at the NHL level, whether this coming season or down the road. He has good offensive skills and he has the ability to punish opposing forwards with some real physical hits without taking needless penalties.

Looks like another solid addition to the Kings already strong prospect pool.