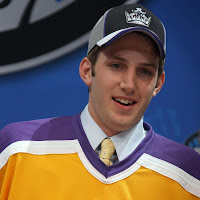 I’ll have a full post-draft recap up later.  For now, here are a couple of quick notes on the Kings first round selection – Derek Forbort.

* From NHL.com – His childhood hockey idol was Wendel Clark because of the way he could score goals and fight.

* NHL Central Scouting’s Jack Barzee added “Derek Forbort has good top-end ability at both ends (of the ice). He’s smart and skates so well, he’s almost 6-5 and he’s got everything there in front of him. It’s just a matter of filling out and getting more experience. He’s probably a top-two defenseman in the NHL if he reaches his potential.”

* He spent the last two seasons with Team USA’s development program.  Although many media outlets are reporting that he won gold with Team USA at the World Junior Championships this past January, they’re wrong.  He wasn’t in that tournament, which is the under-20 tourney.  He did win gold…it was with the under-18 Team USA team though.  That tournament was in Belarus.  Forbort played in all 7 games, had 2 points, 6 PIM and led the team with a +9 rating.  Read more about it on the IIHF website.

* Did he have a feeling he was going to the Kings in the first round?  “I had like a two-minute interview with them, so (it was) kind of unexpected,” Forbort told media after the selection. “It’s definitely a good feeling. I didn’t really know. It was a great feeling.”

* “He’s going to a great program (see next note),” Dean Lombardi said. “He’s clearly raw. He’s young, but when you get a kid with that type of range, you have to do it. He’s raw, but there are some things to work with there.”

* He’s scheduled to play at the University of North Dakota in the fall, a program with strong connections to the current Kings team – former UND captain Matt Greene is an alternate captain for the Kings, Assistant GM Ron Hextall has a son playing there right now (junior Brett Hextall) and the school’s former player/coach/athletic director Gino Gaspariniteam is the father of current Kings scout Tony Gasparini.

* The Grand Forks Herald at the following to say:

– “There’s no better place to go and develop than North Dakota,” commentator Bob McKenzie said. “That place is a factory.”

– Pierre McGuire added: “It’s the perfect place to go. We talk about the way that they develop hockey players. It is run with a pro mindset.”

– UND was the only college program that had two incoming recruits selected in the first round. (Islanders’ Brock Nelson was the other pick this year)

* HockeysFuture.com says he is “One of the most talented defensemen in the 2010 draft. Exceptional decision-making. Has the size and skating and is very agile. Doesn’t like to carry the puck, but his passes are laser sharp. He could stand to add a bit of grit to his game.”

* The Kings tweeted that it was Dean Lombardi’s idea to dress him in the retro purple and gold jersey, saying it was “something special and unique for our long-time fans.”

That’s all for now…back to Staples Center for day two.  As of now, the Kings have seven picks to work with today in rounds 2-7, including two in the third round.  Will Lombardi keep them all?