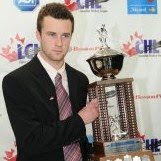 If you’re reading this article, you’ve probably been following enough draft coverage already to know that Friday night’s first round is being hyped as the Taylor vs. Tyler show.

Starting with the third pick things become a little more interesting, with a dozen or so names floating around….kids that are destined to be the NHL starts of tomorrow – like Swiss born Nino and Jack the Goalie.

Then, there’s Brett Connolly.  NHL Central Scouting has him ranked third.  TSN has him projected 8th.  Any other mock draft you see will probably have him ranked somewhere in between.

His story reads like that of a a kid near the top of the board… a first round pick of the Prince George Cougars (10th overall) back at the 2007 WHL Bantam Draft, the CHL Rookie of the Year in 2008–09 (while scoring 30 goals as a 16-year-old) and he’s been a member of the highly regarded Team Canada under-18 team.

So, what’s the issue? Perhaps it’s this… Connolly is a self-confessed former Mighty Ducks fan – “I was a huge Ducks fan when I was young, that was my first NHL jersey”.

Well, it’s either that or some recent health issues. TSN’s Bob MacKenzie says fear not though, reporting that “his agent maintain(s) those problems are all behind him” and Mac adds that Team Canada “remains bullish” on the 6’2″ right wing, thinking his “lack of conditioning and game shape hurt him more than anything else.” Something that will surely be addressed this summer.

In what has been one of the busiest weeks of his life, Connolly was kind enough to connect with The Mayor earlier today to talk a little stick and puck leading up to the draft.  Like a two two minute penalty, this one will be over before you know it…

My dad brought me out to the local rink when I was about 3 or 4 and got me skating.

Besides the injury this season, what one other thing will you be glad to stop talking about once the draft is over?

Well, it will be nice for me to have one team and not a bunch of teams. I can focus on the team that drafts me and them only.

With all the crazy questions thrown at you from various teams at the combine, which team was the most intimidating to interview with?

You’re projected to go early in the first round of the draft. However, knowing anything can happen, what are your expectations for Friday night?

I need to work on my defensive game in order to be the complete player that I want to be.

In all your travels to hockey tournaments, what was the worst food item you ever had to eat?

In Slovakia they served us liverball soup and that was brutal.

It’s been reported that growing up the Ducks were your favorite team and now it’s the Penguins. What drew you to the Ducks in the first place and why switch?

When I was real young I loved watching D3 and that’s why I liked the Ducks. As I grew older, I liked the talent that the Penguins had and enjoyed watching them more.

The Kings have selected two defensemen from the WHL in recent years, Thomas Hickey (Seattle Thunderbirds) and Colten Teubert (Regina Pats). What’s it like to play against those guys?

Lance Buoma (3rd round pick by Calgary at the 2008 draft, plays for the Vancouver Giants in the WHL)

Dustin Tokarski (5th round selection by Tampa Bay at the 2008 draft, played for Spokane Chiefs in the WHL)

Brett Connolly has the skill and desire necessary to bounce back from this season and he’s working hard to silence critics who doubted him.

The team selecting him will be lucky to add a player that HockeysFuture.com says is a “top flight talent…who can make plays at a high rate of speed…(and) can score goals as well as set them up.”

Besides, if this whole hockey thing doesn’t work out, maybe he could be a stunt double for Justin Timberlake’s next movie project.