You are here: Home / draft / Draft 2010 – Interview with Stephen Silas 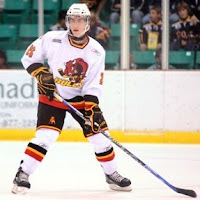 For their 18th birthday most kids like to have a party, spend it with some friends, maybe some family…or go to a local establishment, wink-wink.

Not many spend it sitting in a half-empty NHL arena waiting to hear their name called.

That’s exactly what Stephen Silas will be doing this Saturday though. The 6’1″ defenseman is ranked #60 by NHL Central Scouting, so he’ll probably end up as a mid-round pick in this year’s NHL Entry Draft.

His junior coach, George Burnett of the Belleville Bulls, says “Stephen is a smart player who possesses quick feet and a good stick. He is extremely competitive and has excellent vision.”

Although he mans the blue-line in the OHL, his earliest memory as a player was scoring a hat trick. More recently, with the draft quickly approaching, he’s been focused on improving his game and preparing his body for the next level.

Throughout the process, it’s the off-ice responsibilities that can be a tedious process for some players…with all the interviews and the testing.

So, that seemed to be the perfect place to start when The Mayor spoke with Stephen…

It was reported that one of the questions you were asked at the NHL Combine was “At a party, are you the guy upstairs with your girlfriend or the one sitting on the couch?”  And you said that question caught you off guard., so how did you end up answering it?

I simply answered by saying I was the guy sitting on the couch. I figured it was the most simple answer and wouldn’t get me into any trouble.

Pittsburgh Penguins. They had lots of people in the room when asking the questions.

How about an easier combine-type question today… If you received a phone call saying you had to leave your house in five minutes and could never go back, what three things would you have to take with you and why?

My cell phone, have to stay connected with friends and everything else. My laptop, something I need to function. My family, keep everything loose and fun.

Speaking of family, who got you started in hockey and what’s your earliest memory as a player?

I use to participate in public skates, which ultimately got me into playing hockey and it was my parents who got me playing. My earliest memory was in my second year of hockey playing in our house-league finals, I scored 3 goals in the game to win the championship.

Saturday will have dual meaning for you, with it also being your birthday. Up to this point, what’s been the most memorable birthday and why?

Right now I don’t have a most memorable birthday, I’m hoping that this coming Saturday will be the one I’ll never forget.

Besides actually being selected, what other expectations do you have heading into the draft this weekend?

I just want to have fun with it all, it’s only going to happen once so I want to make the most of it and whatever happens…will happen for a reason down the road.

You played in the Top Prospects Game back in January. Nearly all of the top CHL players were there. What three things did you take away from that game?

Everyone has bad games on different nights, have fun with what you’re doing and better habits to help my game down the road.

You’ve been playing your home games on the larger, Olympic sized ice in Belleville (OHL). Do you prefer that size or the smaller NHL rinks?

The Olympic size, it compliments my game better.

You’ve had a few fights, what is something that you see out on the ice that really gets under skin (enough to fight)?

When an opposing player ‘cheap-shots’ me or one of my teammates, especially when it’s behind the play where the ref can’t see it.

I need to bring more intensity to my game night in and night out…that will round off my game in the future.

Any pregame rituals or superstition?

All right side equipment goes on before the left side, hand shake right before going on the ice with a teammate, followed by a prayer.

Kyle Clifford (2nd round selection by the LA Kings at the ’09 draft, finished this season with Manchester)

Mike Murphy (his former OHL teammate in Belleville, also selected in 6th round of ’08 draft by Carollina)

Thanks to Stephen for taking the time to do the above interview.

Happy early birthday and here’s hoping the next chapter of your career has more Ups than Downs.