You are here: Home / draft / Draft 2010: Interview with Ivan Telegin 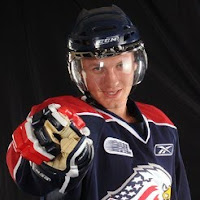 The LA Kings know all about having a Russian forward on the team. For seven seasons now Alexander Frolov has been a key component in the rebuilding of the team. It’s also the only NHL team he’s ever known. Ironically, less than a week before he prepares to possibly depart the team via free agency, another high powered Russian forward could be joining the franchise.

As of now, GM Dean Lombardi’s first pick in the draft will be at #19. One slot earlier than when Frolov was a first round selection back in 2000.

In addition to the slew of North American players vying to be picked, there are five Russians that may still be on the board when Lombardi and crew are given the mic on the draft podium.

Vladimir Tarasenko, Evengy Kuznetsov and Maxim Kitsyn are the three “pure” Russians in the group, in the sense that they play over there. Stanislav Galiev and Ivan Telegin have already begun their adjustment to North America by playing Canadian Junior Hockey this past season.

Telegin is a 6’2″ left wing playing for the Saginaw Spirit in the OHL.  Interestingly enough, if he hadn’t decided to come over from Russia, he’d be on the same team back home with Kitsyn.

The paths of all five have crossed throughout their youth in the Russian national program and most of them will meet up again at the World Junior Championships next winter.  For now though, they aren’t a unit, they’re five individuals looking to be drafted by NHL teams.

So while the debate rages on about how to individually rank the Super Five, James Paliafito – the Director of Scouting for Telegin’s OHL team – had this to say about the player he knows best “Ivan works as hard as any player in the game. Always the first to the puck and very accountable in all three zones. He will score goals and win all of his battles on the boards. Great in front of the net where he enjoys physical contact. Ivan is superb on the power play; he has the ability to deflect shots as well as shoot without much preparation.”

Like his game on the ice, Telegin has been working hard to improve his communication as well. Through his broken English and the Mayor’s broken Russian, they had the following conversation…

When I was younger I was small. My mom wanted me to become stronger, so she put me into hockey.

You scored well in the physical fitness part of the draft combine, including the best overall score for body fat percentage. Was that a goal of yours, to place in the top 10 in several categories?

Yes, exactly. I worked hard to prepare for the tests in advance.

Honestly, I wasn’t that intimidated.

You spent the last year playing junior hockey with Saginaw in the OHL. How old were you when you first knew you wanted to come to North America to play hockey?

I wanted to come to Canada since I was about 13 years old. I really like the Canadian style.

What was it, specifically, that made you want to come over – rather than just develop through the Russian system like so many other players?

I love the speed and power of hockey over here!

It was tough for me to come over becuase I had a contract with Novokuznetsk (note: I think he meant they owned his rights). They did not want me to leave. As I said earlier, the best part has been playing the Canadian style of hockey.

What are you doing to improve your English?

I’ve been going to a special school since coming over. It’s important to me to learn and study English.

Russia has such a deep hockey history. How important is it to you personally to play at the next World Junior Championships?

It is my goal to play for the Russian national team. Every player should want to defend the colors of their nation. It’s a huge honor.

Draft experts predict you’ll be selected in the late first round or early second round. What are your expectations for next weekend? And how important to you personally is it to go in the first round?

I’m very worried (nervous) before the draft. I would like to be chosen in the first round, but it’s not for me to solve.

All coaches tell me I need to throw more on the gate (the net).

If you received a phone call saying you had to leave your house in five minutes and could never go back…what three things would you have to take with you and why?

My stick, a helmet and skates!

Ovechkin – he is by far my favorite player.

I devote lots of time to my family and my girl.

24 because it’s the number I’ve worn since childhood.

There you go ladies and gentleman…Ivan Telegin – From Russia with love.

How do you not get pumped about taking a kid that only wants to take his hockey gear when being thrown out of his house?