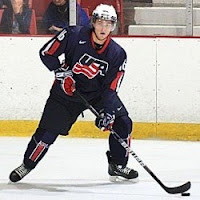 He’ll be the first American player taken at the draft tomorrow night at Staples Center.  He’s expected to go very early in the first round, perhaps even third overall.

If you guessed Cam Fowler, the 6’1″ defenseman from Northville, MI, you’re correct.

Although he was born in Canada (Windsor, Ontario), he moved to Michigan before his second birthday and has represented the United States in international competition – even though he technically has dual-citizenship.

Having already won a gold medal with Team USA at the World Junior Championships in January, then picking up a Memorial Cup Championship with the OHL’s Windsor Spitfires last month, the high point – call it the hat trick of happiness, if you will – should come tomorrow night around 5pm Pacific Time when one NHL team stands at the podium and says “We’re proud to announce the selection of Cam Fowler.”

What would a trip to LA be without a conversation with The Mayor though?  Well, Cam didn’t want to find out.  So, we chatted earlier this afternoon and here’s what he had to say:

Tomorrow is a big day for you.  What are you do you doing to keep the nerves from getting the best of you…and what are you going to do tonight to try to get a little sleep?

Actually, I couldn’t sleep very well last night.  So, I’m a little concerned about tonight.  I’m like a little kid the night before school starts.  Doing things like this (the clinic at TSC with youth hockey players) is helping take my mind off of things for the time being.
I was already having trouble sleeping last night.  I feel like a little kid the night before his first day of school.

Back at the World Jr’s one of the most memorable things to me – besides the gold medal for Team USA! – was both teams changing goalies in the final game.  I’ve talked with several other players who say they’ve never seen anything like that?  Have you?

That was pretty crazy.  I’ve never seen anything like it either.  It was just one of those things, you know.  Also, for Jack (Campbell) to come into that game and perform like that…at such a young age, on such a big stage…that was amazing.  I think it just shows what a talent he is.  We knew that from his performance in some other tournaments for us (the US Developmental Program), like the under-18 tourney, but still…and that’s not meant to take anything away from Mike Lee (their other goalie).  He helped get us to that point, so he deserves some of the credit also.  Overall, both games against against Canada were pretty epic.

Jason Zucker – Zucks has a lot of speed.  He stepped up for us in the U-18s and the World Jrs, as an under-ager.  So, he already has a lot of experience and I think a team will be lucky to have him.  He’s a great player and a good friend of mine too.

Luke Moffatt – He’s always been projected as a great player, even before coming into the program.  He’s developed physically for how young he is.  He’s a good skater.  So, he’s another good prospect.  A good American boy.

Stephen Johns – (his eyes lit up) Yeah, he’s a big boy, that’s for sure.  He’s definitely developed!  A farm boy that’s going to work hard.  He has a lot to offer a team.  He’s mobile for how big he is and he’s a good skater.

What do you like to do with your free time away from hockey?

Yeah.  I played baseball growing up, all the way up until the time I had to give it up for hockey.  I’m an overall sports fan though.  I like watching everything.  I play everything.  I’ve only played baseball and hockey competitively. The other sports I just play for fun.  I’m just an athletic guy, I like playing a lot of different things.

Are you going to have any time to check out some of the sights while you’re in town?

They (the NHL) have lined up a few things for us.  We’re going over to the walk of fame at Mann’s Chinese Theater and then I have the premiere tonight, for the new Twilight movie.

Are you a big fan of the Twilight series?

No.  But, it’s supposedly the biggest movie premier of the year – so, we’re pretty lucky to be able to go over and enjoy that type of thing while we’re in town.

A Day or a Life in Cam Fowler Land.  Something like that because I think I’m in a little different world than anybody else. ( he laughs, not like he’s conceded…more like he sees himself as quirky vs. the rest of the world)

Another interview and another new favorite quote…Cam Fowler Land.

Little do they know it, but one team early in the first round tomorrow night is buying an express ticket to the new, trendy place in town – Cam Fowler Land.

And we all know how important trendy is in a town like LA!