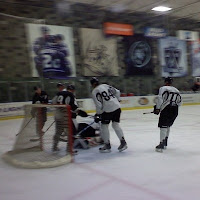 While the draft of this past weekend is only days old, most of the Kings newly acquired assets were on display in El Segundo bright and early Wednesday morning.

Four of the five newbies were on the ice for a scrimmage game, with second round pick Tyler Toffoli the lone absentee.  He was scheduled to play on Derek Forbort’s team…however, he was a late scratch.

On paper, the offense of each side looked fairly balanced.  Guys from Manchester were equally spread out…for example, Team White (Group A) had Bud Holloway, Corey Elkins and Trevor Lewis…Team Black (Group B) had Dwight King, Oscar Moller and Justin Azevedo.

The same really couldn’t be said for the defense though.  Team Black featured half of the d-core from the Monarchs – Thomas Hickey, Andrew Campbell and David Kolomaitis.  Yet, what Team White lacked in experience on D – with four of their six having played in the CHL last season – they made up for between the pipes in Martin Jones.

The complete rosters were:

Everybody knows that Jack and Doughty are the top two defenseman in the organization…and it will probably never work out this way…yet, just for fun, think about how big the other four defenseman could be in three to four years – Muzzin (6’2″), Teubert (6’4″), Campbell (6’4″) and Forbort (6’5″).

For what it’s worth, Muzzin looks much taller than his listed height. Forbort (#84, pictured) is also very tall, yet much leaner than the Muzz.

Regarding Campbell, he might be a guy to keep an eye on. Like Alec Martinez, Campbell is a solid player who doesn’t get the pub that guys like Teubert, Hickey and Voynov get. He’s more of a stay at home defenseman, so he doesn’t have the big stats that fans love.  It’ll be interesting to see where he takes his game. He was taken in the 3rd round back in ’08.

It’s difficult to overly criticize kids at a game like today’s scrimmage. Some of them haven’t been on the ice in weeks (four weeks for Forbort, as an example), they haven’t played together before and many are extremely nervous.

As such, let’s focus on the three highlights from today…an event that could have been dubbed “Third Rounders Only”

Jordan Weal – taken in the third round at last weekend’s draft, he’s as advertised. Fast, smart, skilled. You noticed him when he was on the ice. He also had the lone goal for his team today, scored on a penalty shot. The lone knock on today’s performance was he much more noticeable in the first half than the second. However, that could be related more to the flow of the game…with Team Black not getting a lot of offensive opportunities that period.

Robbie Czarnik – a fellow third rounder (’08), he topped the play of Weal by picking up two goals and at least one assist. Again, you noticed him when he was on the ice. He battled hard for pucks in the corner and was trying to make plays. He’s a bit of a wild card right now, as he quit the Michigan Wolverines college program last November (as a sophomore) and headed to the OHL’s Plymouth Whalers – where he seemed to get his career back on track, picking up 49 points in 43 games. At one point he was supposed to be part of Team USA’s World Jr team last winter…however, he was left behind when all the confusion cropped up with him jumping from the NCAA to the CHL.

Bud Holloway – a third rounder from way back in ’06…he also netted two goals – including the highlight goal of the day…a pretty play where he came out from behind the net, circled around out near the face-off dot and then roofed it past Sean Bonar.

If those were the three stars, let’s also give out a plus and a minus for today.  The Plus goes to Kyle Clifford.  That kid was hitting everything in sight.  Good, clean, hard checks.  Looked to me like he was trying to put everybody (including the coaching staff) on notice.  The Minus goes to Bonar.  He didn’t have a good game in net.  Sure he lost 5-1, but that was only part of the issue.  He didn’t look comfortable in there, was having a hard time reading the play in front of him and was giving up rebounds.

Finally, “the other two”, as they’ll perhaps be known in later years when talking about this draft class…Kevin Gravel (5th rd) and Maxim Kitsyn (6th rd)…were both on the ice for today’s scrimmage.  That’s worth noting if only becuase Kitsyn was able to stay in town on his visa…and Gravel was voted by The Hockey News as one of the 10 “steals” at this year’s draft.

None of the above matters much in the big picture.  It was only a scrimmage.   Take a deep breath and wait for tomorrow.