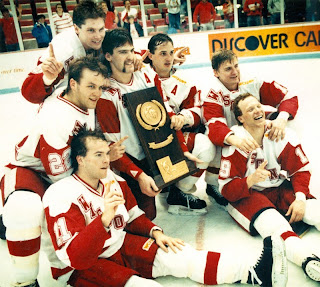 The NCAA hockey championship will be decided over the next three days in Detroit, Michigan – with semi final action kicking off in just a few hours. One team vying for the crown is the Wisconsin Badgers, the former home of many NHL players – including Kings defenseman Davis Drewiske and Sharks sniper Dany Heatley.

And there’s another former Badger on the loose out there, a guy who led the Badgers in goals and points in 1990. His team also won the NCAA hockey championship that season – none other than former Kings forward Gary Shuchuk.

We caught up with him to get some thoughts about his college days and for a prediction on this year’s tournament.  Here’s part one of an exclusive MayorsManor interview with Shuchuk…

First off, how does a boy from Alberta end up at an American university?

Your freshman year you played with Tony Granato and Mike Richter…..what was the biggest difference between Granato in college and when you hooked up with him again years later in Los Angeles?

Tony was my first linemate in Wisconsin. I came in as a freshman and he was a senior. He played exactly the same way. He gave it is all, he played hard all the time. What you saw in LA was what we saw in Madison. he gave it 100% all the time and that’s carried through to the way he coaches now. I was really fortunate to play with him twice in my career.

Now Cammi is probably his better known sibling – however, you played with Tony’s little brother Don Granato also – what was he like?

I just ran into Donnie recently at a youth tournament. The Granato’s were there to watch Toni’s son Dominic play. I was roommates with Donnie. He came to my wedding. Great guy, great family.

Mike Richter went on to play some big games for Team USA. What memories do you have of him as a Badger?

My image of a goaltender is a skinny guy that is kinda off the wall. I remember I went into a stick room one time, the first time I saw Mike…here’s a guy that’s 5’10”, 185 lbs. and built! He’s ripped. I just went ‘wow!’ That’s not a goalie I was used to. When I got to know him I realized why he was so good. He was so focused at the college level. It didn’t surprise me that went he went on to have success with the Rangers and Team USA. He was totally different than any other goalie I played with. He was always trying to stay in shape and he was ripped. You just don’t see a lot of goalies looking that way.

Another goalie that you played with in Madison was Curtis Joesph. What was he like?

We were roommates too. We knew right away he was a special goalie. Mike was a very technical goalie, sound goalie. He was taught how to play a goalie system. Curtis was different. He was totally a reactionary goalie. He was so good that he stole games for us. We knew he was going to have a great career. He was so unorthodox – not like Dominik Hasek unorthodox – but, he was just a reactionary goalie. His nickname ‘the Cat’ suits him so fine because he was so fast. He was so hard to play against too. You’d think you had a shot to score on him and his reactions would steal the puck away.

Sean Hill showed up as an 18-year old freshman during your junior year too. How good was he in college? And was there any trash talk between you two when you played him against him in the ’93 Finals vs. the Canadiens?

We still keep in touch actually and we were just joking about it. Sean Hill in college – I don’t want to say he was the most serious hockey player, because he was always joking around and kept the atmosphere so loose in our locker room, but, ah….when we were playing against him in the Stanley Cup, it was game four back at the old Forum in LA, Sean Hill gets hit by our bench and he just kinda stands up and looks at our bench and says ‘Hey guys, what’s up?’ Guys on the bench were like…I remember Luc Robitaille saying “What’s the matter with him?” Tony and I just looked at each other and shook our heads. He just loves life. And that’s the way he played. He played hard but he never took it so serious. He’s a great guy to be around.

All the guys we’ve talked about so far obviously went on to have solid NHL careers. However, talent evaluation and drafting is such a crap shoot. Was there anybody you played with as a Badger that you thought would go on to be a solid NHL player…that didn’t?

There are a lot of guys actually. The year we went to the NCAA championship, our goalie was Duane Derkson. He was drafted by Washington. We thought for sure he would do fine. He set records at UW and then things just didn’t pan out for him at the pro level. We don’t know what happened.

Another guy would be John Byce. He was drafted by Boston and even got called up the year we won the title. He was a hell of a player in college. He was signed by the Bruins, but it just didn’t turn out for him like we thought it would be at the NHL level.Doug MacDonald

Let’s talk about the NCAA finals in 1990…you had a great season that year, you were Wisconsin’s leading scorer and then you guys beat Boston College 2-1 to advance to the title game. That BC team featured Bill Guerin. Any memories from that game?

Absolutely. It was 2-1 and then all the sudden with 55 seconds left on the clock, I was on the ice…I happen to lose the the face off and they came down and hit the goal post twice. Dead on post. We were able to kill it off. I remember thinking all we had to do was win the face off, but they get two posts. Geez, it doesn’t get much closer – so that sticks out in my mind big time.

The game for the championship wasn’t nearly as close. In the finals you beat Colgate 7-3 on April Fools Day. What memories do you hold onto from that one?

Not being arrogant, not being cocky or anything…but, with the kinda team we had – when were sitting in the locker room with a 4-1 lead after the first period we knew the game was ours. We weren’t about to blow a three goal lead with two periods left. We were thinking about getting back to Madison and where were we going to celebrate this. We weren’t going to let it slip it away. That’s how that group of guys were – once we thought we were going to get a victory, we did it.

The game this year is at Ford Field in Detroit. Does it boggle your mind at all to think about being a teenager playing a game that important in a football stadium in front of all those fans?

To have the opportunity to play in front of 70,000 fans – which was the idea when they booked the place…I went to the game when the Badgers played Michigan at Camp Randall. That was incredible. It was cold, they had 55,000 fans outdoors in the Badgers football stadium. It was wild. What an atmosphere! These guys are going to Ford Field, which is a huge dome. They’ll have 40,000 plus fans in there. It’s something that is going to make this Frozen Four really special.

Is that going to give them any type of a mental edge, having already played in front of the large crowd at Camp Randall a few months ago?

Maybe a little bit. My question is how good is the ice going to be? They say they’re going to try to keep it 60 degrees. So, we’ll see. As for an edge – maybe for the first few minutes. Once things get going though it will be the same for RIT and UW. It won’t matter too much.

Just this week there have been a couple rumors circulating that you might become an Assistant Coach with the Badgers next season. What can you tell us?

The last couple of times it’s become open I went and met with Mike Eaves and we’ve had conversations about it. Once things slow down in the coming weeks we’ll probably have more conversations again. It’s something I’m interested in. It’s my old school. I love coaching and love being involved. If something comes up, I’ll be proud and honored to be part of it. It’s a long process though and right now they have more on their minds than worrying about adding another coach. So, we’ll see.

Somewhat on the topic of Wisconsin alum, there are several former Badgers still playing in the NHL – guys like Dany Heatley and Kings defenseman Davis Drewiske. Any connections to those guys?

Absolutely. I worked with Davis this past summer. I’m part owner of a couple ice rinks in Madison and had the opportunity to train with him a little. He’s an unbelievable young man. I’m so happy for him. He gets it. He came up the hard way and he bides his time. There’s a feel good story right there – if you want it bad enough it’s going to happen. When he got his opportunity with the Kings he made the most of it…and they got themselves a hell of a defenseman…and a great young man.  I still see Heater too. All the old guys – Tommy Gilbert of the Oilers, he’s buying a house here. Basically, a ton of old Badgers come through and we go golfing and stuff.

Come on…RIT has been playing great down the stretch. But, RIT is about to become RIP. UW will win and then play Miami in the finals on Saturday.

Wow, so you think BC is done after today, huh?

I don’t know what it is. Ever since we played them back in ’90 I just don’t like Boston College. So, I’m picking Miami in that game.

Well, Wisconsin won the championship when the Frozen Four was in Detroit in both ’77 and with your team in ’90. Will it be a hat trick this year?

Badgers for the hat trick!

[ed. note – for more with Shuchuk, check out part two of our interview below – he’ll relive his time in the minors with guys like Sean O’Donnell, provide some insight into the man that is Barry Melrose…and of course, talk about his run to the Stanley Cup Finals with the Kings in 1993]

To see a video highlights package of the 1990 NCAA championship game between Wisconsin and Colgate click here.