You are here: Home / Interview / Coaches and Management / Bob Miller on the Olympics, his favorite players, retirement and more 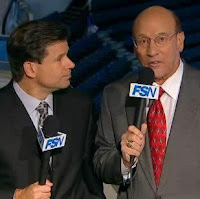 Bob Miller is an institution here in Los Angeles.

He’s even been with the Kings far longer than most fans have been following the team, going all the way back to the early ’70s.  In fact, he had already been calling Kings games for over 15 years when Wayne Gretzky came to town in the summer of ’88.

Over his 35-plus years with the team he’s seen just about everything…well, everything except – you know.

Most recently, he’s had to bide his time for eight years – waiting to get back to where he’ll be tonight…calling a playoff game for the Kings.

Prior to leaving for game one up in Vancouver Bob stopped by Mayorsmanor to discuss a myriad of topics.  In part-one of the interview (posted yesterday), he gave his predictions for round one of the Western Conference playoffs.  Today, he’s back to talk about NHL players in the Olympics, the Canada-U.S. rivalry, Ziggy Palffy, Drew Doughty, Dustin Brown, the World Cup, the trade deadline, Kings prospects, other players around the league he likes to watch, when he’ll retire and plenty more.

MM: Die hard hockey fans are known for circling certain games on the calendar when the schedule comes out in July, wanting to see their favorite players or teams.  Are there any players or teams you look forward to seeing each season?

You talked yesterday about feeling disconnected from the NHL when the Kings aren’t in the playoffs.  How about during the Olympic break, what did you do to stay connected – or did you use it as a mini-vacation to recharge your batteries?

Kinda both. We took a mid-season break, went down to Florida to visit my wife’s sister and her husband, who have a winter home down there. It turned out to be coldest winter in 47 years in Florida, so maybe we should have stayed home.

Exactly! So, we were down there for about a week. It was nice to visit with family and stuff. While we were down there I watched the first U.S.-Canada game, where the U.S. won. Then we came back. I wanted to be home for the second half of the Olympics when they’d get into the medal round. I really, really enjoyed it. I thought the last game, the gold medal game was just unbelievable. The excitement and the emotion in that game were incredible. I like to tell Canadian people ‘Well, the series is tied one-one and Canada still hasn’t beaten the U.S. in regulation.’ After the gold medal game I kept saying ‘So when is the deciding game?’ They always tell me ‘Well, we win when it counts.’

So, overall, you’re a fan of the NHL players participating in the Olympics?

It was an outstanding series. I’ve kinda wavered a little bit because of the excitement of the Olympics this year. However, I am NOT in favor the NHL shutting down for two weeks, to compress the schedule and send pros to the Olympics. First of all, it’s a hardship on the players and everybody when you have to jam so many games into so few days. I think at one point this season the Kings played 10 games in 17 days. You’re asking for fatigue and injury and everything else. In a way, I don’t see the long term profitability for the NHL once the Olympics are over. A lot of people tune into the Olympics when it’s country versus country. Then, are they at the next game between Tampa Bay and Carolina?

The other thing is, I want to see another 1980 Miracle on Ice – with the college guys winning it, the amateurs. You’ll never have that as long as the pros are going. I just think the Olympics, in all of those sports, should be for the amateurs. I know times have changed and it’s not going to happen. But, the pros have plenty to play for and awards of their own. When I grew up an Olympian was an amateur athlete. I still remember the thrill of that 1980 Olympic team beating some of those great teams of the world, who had some pros…but, so what? That made it even more exciting.

What about the idea of going back and doing the World Cup again, like in 1996 and 2004? There’s been talk of possibly bringing it back in September of 2011.

That wouldn’t be bad because then you’d have the players returning to training camp earlier and they’d get in shape that way. I would rather see that than the league shut down for two weeks for the Olympics. Those were both exciting series, I even called a few games.

Back to the Olympics for just a moment, when you watched the games were you honing in on any particular players – like former King Ziggy Palffy – or were you just looking to see some good hockey games?

Michal Handzus, playing for Slovakia – and to see them do well. It’s too bad Slovenia didn’t have a team so Anze Kopitar could have played.

I think from a standpoint of Drew Doughty of the Kings, we knew how good he is. But, the Olympics really – I think – raised his profile not only in North America, but around the World. All of the sudden, I think because of the Olympics, his name is being brought up for the Norris Trophy. Writers in the east, who were maybe in bed when our games were on TV, finally got to see how this guy could play and how good he was. It benefited him from that standpoint. And probably the same with Jack Johnson.

On a side note, we were there for the Olympics too – and I’ve never experienced hockey fans wanting to talk about a Kings player – well, since Gretzky – as much as people wanted to talk to me about Doughty. They just couldn’t stop talking about him everywhere we went in Vancouver.

I’m sure it’s great for his confidence too. I think going into the playoffs – without any NHL playoff experience, for guys like Doughty, Johnson, Brown – that experience of the Olympics in Vancouver, where the Kings will be starting the playoffs…I think that experience is going to be beneficial for them. Because they were under such scrutiny when they were there. Now they’re coming back to the same building…I think it’s going to be very valuable for them.

One of the realities of the game is players eventually retiring. I haven’t seen much made of this next point, but it sure seems like a larger group than normal may be exiting the NHL this season. Already announced or rumored to possibly be retiring this summer would be Keith Tkachuk, Mike Modano, Teemu Selanne, Scott Niedermayer, Rob Blake, Niklas Lidstrom, Chris Chelios, Doug Weight, Matthew Schneider…

You could maybe throw Mark Recchi in there too.

If indeed they do, you’re right. It’s always up in the air if they’re going to come back. You look at Modano over the weekend. He had great ovations in Dallas and Minnesota, where it all started for him. That was nice to see, but it’s too bad if it happens. Because what this league needs is recognizable names. Those people you just mentioned, every hockey fan knows them. There are, of course, new guys coming up all the time. But, I hate to see those guys call it quits – yet, you know it’s going to happen…they’re not going to play forever. Once they get into that 37, 38, 39 year old age you know it’s going to happen.

Perhaps a few young players that will replace some of those names might actually be in the Kings system. They’re deep with prospects right now. Do you have time to keep up with any of the kids hoping to make the Kings in the years to come or do you have your hands full with the NHL rosters?

I do when I hear about things from time to time. I just don’t have the time to do it on a daily basis. I know that Martin Jones was the goaltender, first team all-star playing for Calgary in the WHL. Brandon Kozun was the leading scorer. Brayden Schenn had a good year. It’s a little easier to keep up with Manchester. We get those stats all the time, so it’s easier to see how they’re doing – or even the Ontario Reign.

You know, with 30 teams in the NHL and so many players changing teams at the trading deadline…I hate the trade deadline day…I hate to see 55 players jump from team to team. I know everybody speculates ‘Who’s gonna come here and who’s gonna go there?’ But, I liked it a lot better when you had fewer teams and fewer players to keep up with. I find it a lot more difficult now keeping up with every team and preparing for games now than I did 30 years ago.

So final question Bob – You’re obviously a legend here in Los Angeles, but even legends can’t go on forever.  Across town another legend, Vin Scully, has already announced this is his last season. You’ve been quoted as saying one of your fears is retiring and then the Kings win the Stanley Cup the next year. Kings fans would love to have you around forever.  But, with all the travel and stuff, does retirement ever creep into your mind?

I’m kinda taking it year by year, but it’s getting close. I’m not gonna try and go as long as Vin – until I’m 80 something years old. I still enjoy it. But, like I say, it’s becoming more and more difficult to keep up with everything…even with the availability of sources that we never had before…like the internet and all that kinda stuff.

I would say it’s close, but it might be a few years off before I say I don’t want to do it anymore. On certain nights, like the last game of the season in Colorado, where we won in overtime…it’s just fun to be there, to just call that game. Of course, during a season, there are other nights – like anybody, there are nights where you think ‘Oh boy, I didn’t do a great job. Maybe this is it.’

I don’t think I’m ready to say that I’m done yet. But, let me put it this way, it’s not going to be too far off.

Well Bob, let’s hope the Kings give you plenty to be excited about during the playoffs this year, so we can push those thoughts out a few more years.

If you missed it yesterday, click here to read part one of the interview with Bob – where he gives his predictions for the first round of this year’s playoff match-ups in the Western Conference.  He also weighs in on the Forum vs Staples Center debate and talks about Terry Murray juggling his lines all the time.