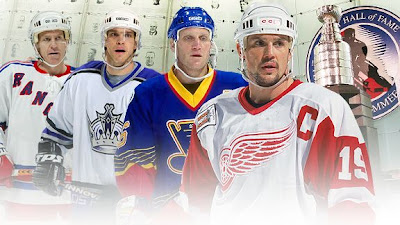 For many hockey fans Toronto is the center of the universe. There’s no denying that’s true for at least the next few days as four of the greatest players ever will be inducted into the Hockey Fall of Fame there on Monday. They all have something special about them. Yet, Luc Robitaille is just a little different than the rest. We all know the story of the ninth round draft pick that went on to become the highest scoring left wing in NHL history. But for the Kings organization and it’s fans its the first time truly one of their own is being enshrined. Dionne and Gretzky had great years in LA and are key parts of the team’s history. However, Luc was selected by the Kings and grew up right before our eyes. He is Los Angeles. He is a King.

Right before Luc and his family headed off to Toronto for the festivities this weekend he spent some time with Mayors Manor and reflected on his playing days. We’ll be publishing a series of articles over the weekend reviewing various parts of his career. To start things off, let’s look at what Luc said were the Highs and Lows of his career:

note: I had to interject here with “Interesting, Luc. You left the cup off the list.” He said “yeah” with a real drawn out pause, as if to rethink his answer. Then he said “Well, I guess you could put it down as an asterisk, you know.” Funny thing was, I had the impression he wasn’t being sarcastic. It really struck me.

Luc wasn’t just a player. He’s always been a fan of the game too. And fans connected with him because of it. So, it’s only fitting that a few of his highs and his lows would match up with those of many Kings fans. The connection lives on.

It was a pleasure to watch Luc play the game he loved so much. I’m sure I’m probably not the only person in Los Angeles who can say this, but…thanks, Luc – you helped me love love the game a little more too.

We were the lucky ones.

20 Questions with Lucky – the full interview

Luc on his teammates

Players speak out about Luc