If you’ve been following the High/Low series here on MayorsManor you know we’ve had guests like Jim Fox, Mark Hardy and even ESPN’s John Buccigross stop by already this season.

Well it’s time to dip into the Kings past once again to call upon a former player turned broadcaster, Kelly Hrudey. 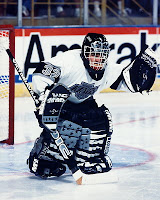 Kelly played for eight years in Los Angeles, minding net for the team during one of its real glory periods – including the famous 1992-93 season when they went all the way to the Stanley Cup Finals. He now works for the CBC in Canada and still watches plenty of hockey. With October about to end we thought it was the perfect time to get Kelly’s take on the first month of the season. Here’s what he had to say:

As most predicted, the race in the Western Conference is as tight as ever. While we had Kelly’s attention we played word association with those 15 teams and here were his answers:

To wrap up this part of the interview I asked Kelly if he were a GM of a new team given the ability to pluck six guys off of the 30 NHL rosters (3 fwds, 2 dmen, 1 goalie), who would he take:

Defenseman – Nicklas Lidstrom (“Not sure how many more seasons he could give me, but I’d have to take him.”) and Shea Webber (“Tough bugger…very hard to play against.”)

Goaltender – “Brodeur is the obvious pick, but I would need a guy for the future. I really like Ryan Miller and Luongo. But, I’d have to go with Marc-Andre Fleury. I just love him. He’s a big game goalie and I’m not as critical of him as others are. Last year he played exceptionally well. He’d be my guy.”

Kelly provided many more opinions about the current game, as well as the guys he played with and against. We went all the way back to him growing up in Edmonton, being drafted by the Islanders and later being traded to the Kings. The full interview should be posted by the end of the weekend. Keep an eye out for it.

UPDATE: the full interview with Hrudey has been posted – search ‘Hugging the Post with Hrudey’ in the search box in the top right corner of this page to read it.

Reflections of a Cup – Roy, Melrose and Blake comment on the Kings vs. Canadiens