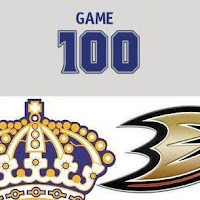 It’s been more than a decade since both the Kings and Ducks were in the playoff hunt this late in the season.

Surprisingly, the two teams have never participated in post season play at the same time. Could this be the year?

When it comes to regular season match-ups, this will mark the 100th time the Kings and Ducks have squared off. LA holds the edge in the lifetime series 45-36-18, including 2-1 so far this season.

How many goals does your favorite Kings forward have against the Ducks?

TRIVIA QUESTION – How many total goals do the Kings six defensemen have against the Ducks lifetime? (answer below)

Other notes and links of interest…

* Earlier this season I posted an article looking back at the last time it mattered this much. Understand the Kings-Ducks rivalry in the story here.

* Click here to read the interview with Bobby Ryan where he talks about his friendship with several Kings players and the hit on Oscar Moller.

* Ducks rookie defenseman Cam Fowler visited MayorsManor the day before he was drafted by Anaheim. Read his thoughts here.

* Back in December readers of MayorsManor voted one of the Ducks as their least favorite player in the NHL (results here). Can you guess who it is?

Trivia Answer – The Kings defensemen have a total of three goals lifetime against the Ducks, two by Jack Johnson and one by Willie Mitchell.