You are here: Home / draft / LA Kings Prospect Report – Close to The End 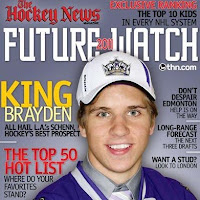 The college hockey season is over, junior hockey wraps up this weekend and the AHL isn’t far behind.

Most junior teams have a pair of games left this weekend and nearly all of the Kings top prospects in the CHL are poised for great playoff runs, as detailed below.

Also making the rounds recently is The Hockey News ‘Future Watch’ special edition, which crowns Brayden Schenn as the number one pro prospect.

Schenn – has posted incredible numbers since being acquired by his hometown team, the Saskatoon Blades, at the trading deadline (20 goals and 29 assists for 49 points in 25 games). Regardless of the outcome in their final games this weekend, the Blades will end the regular season with the best record in the WHL. Thus, they’re heavy favorites to win the league championship and move on to the CHL’s Memorial Cup.

Loktionov and Voynov – Perhaps the Kings future stars on offense and defense. For now, they’re spending time apart. Loktionov is out of the season with a shoulder injury and Voynov leads the Monarchs with 32 assists. The team also sits atop their division with 90 points, second best in the Eastern Conference.

Forbort – Freshman blueliner at the number one ranked University of North Dakota. The Fighting Sioux are playing in this weekend’s WCHA tournament. The team, full of seniors and experience, are hoping (and expecting) to be in the NCAA Frozen Four in a few weeks.

Toffoli – He could be the steal of last year’s NHL Draft. Already a 50-goal scorer this season, Toffoli and the Ottawa 67’s are looking to make some noise in the OHL playoffs that begin next week. They currently lead their division and are second in the Eastern Conference.

Maxim Kitsyn – One of the breakout stars from the recent World Junior Championships, Kitsyn now plays for the Mississauga St. Michaels Majors – the number one team in the OHL and the host for this year’s Memorial Cup.

Linden Vey – His Medicine Hat Tigers will most likely be seeded third in the Eastern Conference when the WHL playoffs begin next week. At some point, they’ll probably have to contend with Schenn and the Blades if they want the championship though. Vey leads the WHL in scoring with 114 points (46g, 68a). If his three point lead holds, it will mark the second season in a row a Kings prospect was the top point producer (Brandon Kozun 2010).

Nicolas Deslauriers – Quietly putting together a strong season in his first year with the Gatineau Olympiques, after being traded there during the offseason.  His 43 points (12g, 31a) and plus-20 rating are tops among the team’s defenseman.  They have two games left before the QMJHL playoffs begin.

JF Berube – The Kings only other prospect in the ‘Q’, Berube tends goal for one of the top teams in the league, the Montreal Juniors.  He is among the league leaders in nearly every statistical category – wins, goals against average, etc.  His team has already clinched first place in their division and will most likely finish with the second best record in the league.

Several of these kids have been on MayorsManor this season (links below) and we’re lining a few of them up to stop by next week for some postseason previews. Stay tuned.