You are here: Home / AHL / Jarret Stoll on Fight with Dustin Penner 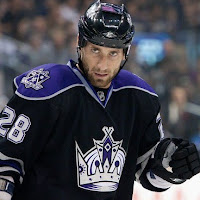 This Dustin Penner-mania is starting to reach Brayden Schenn levels.

It looks like it may be all Penner, all the time for the next few days.

So, sticking with the theme – let’s check in with Jarret Stoll, one of his former teammates in Edmonton.

Earlier today we heard what Penner had to say about the time the two got into a fight back in their AHL days (Penner was with Cincinnati, Anaheim’s affiliate). What does Stoll remember about it? Keep reading…

MM: Much has been made over the last few days about Penner’s friendship with Matt Greene. How about away from the rink, did you guys socialize much when you were both in Edmonton?

JS: We had some good times, yeah. We were kind of all, in a way, growing up together there – having dinners, going to movies and hanging out on the patios and stuff, having a good time and enjoying ourselves and loving the game. It was some good times. He lived with Greenie, so they had a lot more intimate moments, if you will. But, he’s a good guy, a good friend and we’re happy to have him here.

MM: In 2004 when you guys were both in the AHL, there’s a December 2004 game recap saying you two had a fight. Any memories from that situation?

Uh, we might have. I remember a line brawl where something happened. I don’t know if it was him. I’d remember if it was him because I probably would have gotten the worse of that one. But, I’m still playing, I’m still here – so I guess it wasn’t that bad.

[note: Stoll might be right about the line brawl aspect, the box score here shows seven different players assessed penalties at 5:55 of the third period.]

In all seriousness, how about the addition of Penner…

You know, a big strong guy like that, it’s good to have him on our team and on our side. He’s got some good hands down low. He’s going to score some nice goals too that will surprise a lot of people I think. The one year I played with him in Edmonton he scored some really nice goals – coming out of a play that was nothing, he made something out of it. So, he’s going to help our team, help our scoring, be huge come playoff time for our team and he’s won a Stanley Cup. That kind of experience is invaluable.

MM: It looks like he’s going to play on the top line with Anze Kopitar. Any lobbying of coach Murray to put him on a line with you and Ryan Smyth to create an all-Oilers line?

Players changing lines on the Kings?

Painting By Numbers With Ryan Smyth