You are here: Home / comments / Dustin Penner on His Possible Out-of-Body Experience 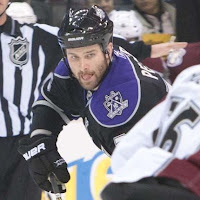 Dustin Penner has played 417 regular season games in the NHL. However, none of them have been against the Oilers since March 9, 2007.

A few months after that game he signed an offer sheet (restricted free agent contract), which the Ducks didn’t match. Meaning he was moving to Edmonton.

Over the next several years he played his former Anaheim team several times per season. More recently though, now as a member of the Kings, he played his first game vs. the Ducks from the other side of the SoCal rivalry – something he talked about here.

Tomorrow night will be another first, as he’ll play the Oilers in Edmonton – the team that traded him to LA just a few weeks ago.

Here’s what he’s thinking as the game approaches…

MM: Prior to the game with Anaheim you told us about the Penner Cup. I was thinking, with you here in LA now, is the Penner Cup still between you and Anaheim or has it shifted to you versus Edmonton?

DP: I think we just threw another team into the fray. It’s like a three-way tournament now.

MM: How about playing Edmonton, a team you were part of just a month ago…

DP: Yeah, it will be a really interesting feeling. It’s like two different seasons because now I’m engulfed in a playoff race with the Kings and getting to know the system and the guys in the organization. It feels almost like a whole new season for me. I think that will kind of give me some retrospect on what my year has encompassed – being traded for the first time at the trade deadline and then going back and seeing those guys, knowing that I could still be up there this year. It will be interesting and almost like that movie ‘A Christmas Carol’ where it’s an out-of-body experience. It will probably be a really weird feeling that I haven’t encountered before. I’m looking forward to it nonetheless.

MM: Guys tend to play a couple of different ways against their former teams. Some are super focused, really aggressive and they’re out to score a goal or two. Others tend to subconsciously back off a bit as they’re playing against their buddies. Having just gone through it, playing your friends in Anaheim, how do you feel you approach things?

DP: Honestly, being on a team now that is in a playoff race, my main concern is just getting the two points and trying to secure a playoff spot. It will be nice to see those guys, play against them and have a few laughs. But, at the end of the night, we need those points and they don’t.