You are here: Home / comments / Dustin Penner Comments on PennerMania 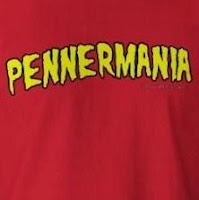 One week ago today PennerMania was launched in Los Angeles.

On message boards and social media sites most Kings fans were over the moon about GM Dean Lombardi’s acquisition of left winger Dustin Penner.

And by the time he made his debut on Thursday night vs. Phoenix it had nearly become an epidemic…even appearing as a trending topic on twitter for a few hours.

Then, when he scored his first goal as a King on Saturday afternoon it may have reached a new level too.

Yet, what about Penner? As coach Terry Murray said yesterday ‘It’s been a very intense probably month, maybe longer, for him’ – so, does he even know what’s going on? I asked him…

MM: Are you aware PennerMania is running wild in Los Angeles?

DP: All my PennerManiacs are coming together and forming a cult it sounds like. I heard about that and it’s really ironic seeing how one of my favorite wrestlers was Hulk Hogan.

MM: Well, the PennerManiacs can’t get enough of you. They want more Penner information. So, how about we do a couple of quick hits. Who is the toughest defenseman you’ve ever played against?

MM: You obviously know SoCal pretty well, having lived here even before the trade. What’s your favorite thing to do in Los Angeles away from the rink?

DP: Probably hang out with my family or golf.

MM: Are you going to get on twitter anytime soon?

DP: I don’t know. It seems like a lot of fun. I mean, I don’t need to know everybody’s thoughts on everything they do every day. I have enough going on that I don’t have to follow that. But, I do see the point of it. I don’t think I’d share any of my stories, but enjoy other people’s – like Charlie Sheen. Winning!

MM: How about your love for Sour Patch kids? Is that still alive and well?

DP: I’ve cut back for my own good. But, I still do enjoy an odd package of Sour Patch kids.

DP: It’s not an urban myth. It’s like a fish story though. It gets exaggerated as I get older. I entered high school at 5’6″ 120 lbs. I didn’t grow until my last year of high school and into my first year of college. So, I’d say in 18 months I probably grew a foot and (gained) 40 lbs.

MM: How about favorite athlete growing up?

More later today on Penner, including comments from Wayne Simmonds and Matt Greene regarding his first week in Los Angeles and the upcoming road trip.

PennerMania By The Numbers (and video)

Chirping with Dustin Penner – interview from his first practice with Kings

Coach Terry Murray on What He Wants From Dustin Penner