You are here: Home / NHL / Canucks / Dustin Brown says ‘It’s on the players that are playing’ 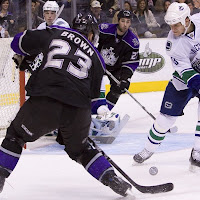 Returning to the post season for the first time in eight years – with a new General Manager, new coach and entirely new roster – they faced off with the Vancouver Canucks, a team they last saw in the playoffs following the 1992-93 season.

After splitting a pair of overtime games in Canada, the series was tied 1-1 and headed back to Staples Center. With the building as loud as it’s probably ever been, the Kings offense exploded for five goals – three of them on the power play, including two by Michal Handzus – and downed the Canucks to gain a 2-1 series lead.

Vancouver took over from there, winning the next three games and closing out the series in six games.

Say all the positive things you want about ‘learning to lose’ and being ‘a young team, they’ll only get better’ – yet, it was still a tough pill to swallow for a group that hoped of so much more.

On opening night this season the two teams would meet again. And you could just see how much the Kings wanted it, vividly in the eyes of every player. They won that game 2-1 in Vancouver and then took the rematch eight days later in Los Angeles by a score of 4-1.

Like the playoffs of last spring though, the Canucks had seen enough. When they met for the third time this season, Vancouver was victorious 3-1.

For some pre-game perspective, here’s what Handzus and Dustin Brown had to say about tonight’s fourth and final meeting between the clubs…

Handzus – “It’s going to be a tough game, especially in that building. They have a great team. They’re kind of a lock for the President’s Trophy. So, they had a great year. But, I think we play them good all the time when we play them. It’s always an exciting game and it’s going to be exciting again.”

Brown – “They’re the best team in the league right now. So it’s a good challenge for us, going in there on the road. It’s a good test for us prior to the home stretch and we have to find a way to win the game. It’s that time of year where regardless of the situation, it’s on the players that are playing to win games.”

A not so subtle nudge from the team captain.

Dustin Brown Ready For Something New

Johnson and Handzus on Kings playing the Oilers