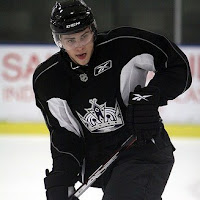 On June 27, 2009 the experiment ended. Six years earlier, the Kings had used the second of two first round picks they received in a deal with Colorado (for Rob Blake) to select 6’7″ Brian Boyle.

On that day he was jettisoned to the New York Rangers for a third round pick in the 2010 NHL Draft.

Perhaps the most interesting part of the story isn’t the connection to the still-controversial Blake deal or the apparent flaming out of Boyle’s (perhaps) promising career. Instead, it’s why Weal was even available with the 70th pick to begin with. Why was he still there in the third round?

That’s about a full round later than the average of where four high profile scouting lists had him pegged.  NHL Central Scouting ranked him 30th, International Scouting Services #32, The Hockey News #41 and TSN had him #48.  That should have put him as a possible late first rounder…or early to mid second rounder, at the latest.

Only three players eligible for this year’s draft were coming off 100 point seasons in the CHL.  The other two, better known as the Taylor and Tyler show, were already gone before the Florida Panthers picked third overall.

In the previous 18 months he also had been named the WHL Eastern Conference’s Rookie of the Year, won a gold medal with Team Canada at the 2009 Hlinka Tournament and led his team with nine points in six games at the 2010 IIHF World U18 Championship.

Besides falling on draft day, you could also make the argument he was snubbed by Team Canada when he wasn’t asked to attend their summer evaluation for the upcoming World Junior Championships.  The Kings may have been well represented by Kyle Clifford, Brayden Schenn, Tyler Toffoli, etc.  Yet, Weal was somehow left off the list.

For his part, Weal just shrugs it off and looks forward, not backwards.  Take a look…

MM:  Overall, how has camp been going so far?

JW:  It’s been really fun.  It’s a good experience.  I’ve just been trying to work as hard as I can and take it day by day.

In the two-game Rookie Series last week in Phoenix,  you picked up a goal in each contest.  Did any of the coaches have any specific words for you after your performance?

One of your goals was set up by Jordan Nolan.  He’s a guy you probably don’t know very well, right?

He’s a really good player.  I think he played in the OHL last year, as an over-ager.  He’d be a guy that would be really valuable to a team.  He’s big, physical and he has really good hands for a big guy.

After getting drafted in June and then coming to camp here the week after, you’ve had a few months to study up on the Kings.  What did you learn over the summer about the organization as a whole?

They really want to win.  They’re not a team that wants to go through the motions and just show up and play games.  They want to really win and their goal is to win the Stanley Cup.  I really like that.  I like how determined they are.

Coming into the draft, did you have a sense that LA was interested or did it come out of left field when they took you?

They talked to me a few times, so they were one of the teams that I thought was a possibility.  I was really glad to be chosen by the Kings.  It seems like a great city, a wonderful place to play.  And I had heard so much good stuff about this place.  I’m excited to keep moving forward.

Talk about playing with Colten Teubert (Kings first round pick in 2008) in Regina.  What’s he like, both on and off the ice?

Off the ice he’s the team clown.  He likes to tell jokes and keep everybody loose.  I think he does that really well.  He was our captain last year and he made sure it was never too tense.  He was able to get the guys to relax before games, so they could go out an play.  On the ice, he’s a scary guy to play against.  He’s really in your face and he’ll give you a cross check anytime you’re near him.

How about pranks.  Any good pranks going on up there?

Not so much.  We were more of a team that just liked funny stuff, like funny movies on the bus and stuff like that.  We weren’t really a team of pranksters.

What was the movie of choice?

So, you guys sit around and quote lines from Anchor Man then…

Ace Ventura – Pet Detective.  We like that one a lot.

Regina hasn’t had much success over the last few years.  If you were to end up back there this season, how do see the team shaping up this year and what would be some of your personal goals?

To make the playoffs, first and foremost.  I haven’t had the experience of playing in a seven game series yet.  Well, I did when I was 15 – but, I wasn’t really a big part of it.  I was too young for it. [note: he joined the Pats with just a handful of games left in the regular season that year…and didn’t see much ice time when they lost in the first round of the playoffs]

What’s it like to come to camp here in LA and now be teammates with a guy like Brandon Kozun, somebody you’ve battled with in the Dub.  Is it a clean a slate?

Have you given any thought to the outdoor game the Pats will be playing in this year?

That’s going to be awesome!  Getting a chance to play in…well, I think it’s going to be the second one now – but, it will the first one in Canada.  That will be nice.  Hopefully it’s a packed crowd and it will be amazing to play an outdoor game.  I’m hoping for minus-20 and a blizzard, so it’s just a grind fest out there.  That would be fun.

How closely do you plan on following the Kings this year if you’re back in the WHL?  Will you be too focused on what’s going on with your team or now will you be keeping up with things online or on your phone, paying a little closer attention to what’s going on in LA…or even Manchester?

Everything.  I’d really like to check up and see how people are doing.  And how teams are doing that I’m associated with.  It’s going to be really cool watching how the Kings do this year and seeing if maybe in a few years I can be part of it.

Some guys can be a little overwhelmed in their first camp, being around all the pros.  How are you trying to approach things right now?

It does put you at awe when you see them all for the first time.  Growing up you see these guys play in the big time so much and you’re heard their name, so it’s a strange feeling to see your name up next to theirs.  Yet, at the same time, you have to take it as an opportunity.  It shows you that you’re that much closer to where you want to be.

Some junior players have come in here and been able to steal jobs in recent years – guys like Drew Doughty and Wayne Simmonds.  When you came down here for camp were telling yourself ‘I’m going to be the next guy to do that!’…or do you come in with tempered expectations, wanting to learn and get your feet wet before coming back next summer?

You have to come in and try to make the team.  If you sit back and you’re all nervous because you’re playing with the pro guys, it’s going to take you off your game.  You’re not going to be thinking right.  For me, I just have to go out there and play like I can everyday.  I have to take one practice, one workout, one game at a time – show them what I can do.  If I play my best, good things will happen.

So far, good things have been happening for him here.

In fact, with his two goals in Phoenix last week, you could make the argument that he wrapped up last week as the MVP of Rookie Camp.

It’s well known that GM Dean Lombardi loves kids from the WHL.  And with Weal being the only player he selected from there this year, that should give a small glimpse of just how highly the Kings think of him.

Unfortunately, fans in LA may not get to see him in game action anytime soon.  His lone preseason game could be Wednesday night in Colorado.  With Regina set to open their season on Friday, it’s conceivable that he could be sent back to juniors before the Kings play their first game at Staples Center on Thursday.